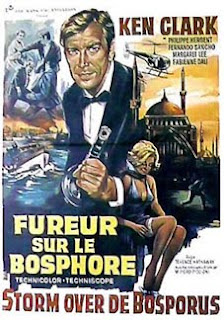 This second adventure for James Bond knock-off secret Agent 077 sadly didn't out due the first film "Mission Bloody Mary" like the second Bond film and similar namesake "From Russia With Love" out did Bond's first adventure "Dr. No." Why might you ask? Well if you ask me it's due to the fact that "From the Orient with Fury" got released the same year as 077's first adventure and the hurried production reared its ugly head with flaws. It's not a complete loss as it still manages to be entertaining Euro Spy flick.

This time agent Dick Malloy must rescue a scientist from some terrorists what want him to build a laser to... du du duuuuu.... take over the world. Along the way 077 travels the globe and gets into a lot of chases, fist fights and women's beds.
The plot is pretty typical for Bond knock-off fair and the typical Bond must-haves are included: exotic locations, sexy babes, gadgets (including a camera belt and Morse code suspenders) and fist fights. Even with all this the lackluster plot tends to bog this film down and it does become dull far too often for an espionage thriller.

Ken Clark again is wonderful in the role of 077 was he is both a two fisted fighter and cool headed for a super spy. For Bond clones, you can't get better than Clark. The villains though are rather boring and the head baddie actually gets some unintentional laughter towards the end when he goes all bonkers with the death laser, disintegrating rock and soldiers in the process.

"From the Orient with Fury" is easily the weakest entry into the 077 trilogy but it is still entertaining in its own low budget, James Bond inspired knock-off way. Compared to the other entries this one just lacks a good plot and gets bogged down because of it. Like the other films this is rather obscure but is the easiest to obtain on DVD.

Like the other two entries the picture ratio screwed up on the Dorodo Films DVD. The 2.35:1 picture ratio is stretched to 1.85:1 making the image, and characters look tall and thin. Annoying, yes, but it's the only way to see the film for know. After contacting Dorado Films about the problem I was informed that they would re-release all three entries at later date with the ratio problem fixed which is great news for us Euro Cult fanatics.