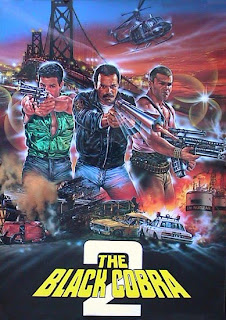 "Black Cobra", which was just a poorly executed "Cobra" rip-off, was a lame action film that wasn't clamoring for a sequel, let alone a franchise to emerge from its bowels. None-the-less a franchise did emerge and to be honest this sequel isn't too bad, for an Italian B grade film shot in the Philippines that is. What makes this sequel better than the original? Well it doesn't take much but it's mostly due to director Dan Edwards. Dan Edwards... hmmm... since this is an Italian film I doubt that is his true name. Sure enough it's a pseudonym for Edoardo Margheriti, son of Italian B-action movie god Antonio Margheriti. No wonder it's better!

Detective Malone (excuse me, it's Lieutenant in this film) is still up to his excessive force ways in the windy city Chicago (hard to believe that "Chicago" in the first film had a beach and ocean front.... continuity goof anyone?) and his boss is fed up so he sends him on an away assignment to the Philippines. While there he meets his new boss, and they predictably dislike each other at first as their methods differ but grow to like each other towards the end when they kick and shoot the living shit out of a terrorist organization.

Fred Williamson is much more lively in this sequel acting more like he's enjoying being on set by letting his charm shine through unlike that zombie performance in the first film. Sadly he is continuing to show age as fight and foot chase scenes are rather poor and you can tell he's in pain even in minor movements like getting up off the floor. Still his presence can make any B-grade film somewhat entertaining. In an odd move the filmmakers cast ex-Spiderman star Nicholas Hammond (from the 70s TV show) as his supervisor in the Philippines. I don't know about you but having Williamson and Spiderman in the same film has always been an action fantasy of mine... admit it, it was for you too!

Director Edoardo Margheriti learned a lot from his dad by being assistant director on many of his B-action outings and he uses all that experience in this, his first solo feature film debut, to his advantage. No doubt having a zero budget to work with like the original film, he is still able to give this sequel a much better look and style the first film sorely lacked.

I also dug the new Filipino setting. Sure they only moved the setting to the Philippines as it is cheap as shit to shoot there (fuck it seems 90% of the film output from Italy seems to have been shot there in the 80s) but it gives the film a likable, foreign looking backdrop. To top it off the hilarious low grade Harold Faltermeyer inspired score just adds to the fun.

I'm not lying when I say EVERYTHING about this sequel is better than the first film. The style, the look, the action sequences are all much greater and best of all Williamson doesn't give a zombie-like performance. Is it still a cliché, cheap jack action film? Sure it is but at least this one is enjoyable. Margheriti and Williams would team up again for the next entry "Black Cobra 3: Manila Connection."