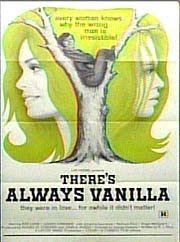 After the success of "Night of the Living Dead" one would think director George A. Romero would follow-up that huge success with another monumental horror film.... one would think right? Hell No! Not wanting to be type-casted as a horror film director, Romero hastily decided to branch his horizons and direct a romantic dramedy. Was it the right move? Well considering NO one saw the film at the time and no one knows of its existence today other than Romero himself and his most die hard fans it would be safe to say that's a 'negatory'. Just because it's relatively unknown doesn't mean it's a bad film, right? well...

We've got a clean cut drifter (new-comer Ray Laine) who drifts into his home town, meets with his dad and takes him to his ex-girlfriend's home where he gets his dad laid by a stripper. Now sending his dad on his way he by chance runs smack into a beautiful model/commercial actress (Judith Streiner from "Night of the Living Dead"). They begin a topsy turvy relationship that results in heart-ache and an attempted abortion. Cry me a river.

The main problem with this film is it feels incomplete. It's like Romero didn't have enough funding to completely shoot the script so he had to quickly shoot poor narration sequences and somehow stitch together the film with these on-screen narration bits to help the film flow and make sense. The result is just unfocused no matter what clever editing tricks Romero's has up his sleeves. The film really also has no purpose or goal to its plot leaving the viewer scratching their head after the film wraps up with no questions answered or any plot elements tied up.

The acting is actually rather good for such a no-budget film and Ray Laine gives a good performance as the very confident, though unsuccessful drifter with his head in the clouds. The good acting and some clever editing is the only thing about this film I can give praise for. The rest is just missed the mark.

The final result went mostly unseen by the public and Romero is very open about not liking the film. After finally seeing this 'lost' film of his I can see why as it isn't very good and just seems like a pieced together picture of a film that wasn't completed properly. This is still a must see as a curiosity piece for Romero die-hards as this was his one of his very few forays outside the horror genre. Just don't expect a GOOD film. Anchor Bay was gracious enough to include this film as a 'bonus' on their DVD release of Romero's third film "Season of the Witch" for those who are interested.