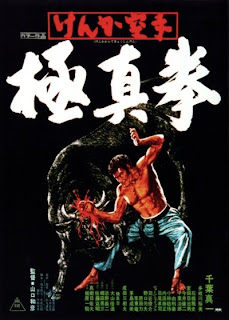 It is official, Sonny Chiba has beat out Bruce Lee as my favorite martial artist. His films may be more cheesy but I dig the heightened violence and dirty fighting style of the man with intense eybrows.

In “Karate Bull Fighter” (released in America as “Champion of Death”) we have Sonny Chiba play Masutatsu Oyama who in real life was Chiba’s martial arts instructor. Don’t worry as this isn’t like those dreadful biopic Bruceploitation borefests. As a matter of fact if I didn’t read the synopsis of the film I wouldn’t have even known it was based on a real man. Even so I doubt this film is completely accurate and plays more like an entertaining and relatively well made martial arts picture.

Not long after World War II, Oyama meanders into a dojo where the Japan’s Karate championship is taking place. Looking ragged and dirty, he enters the tournament and takes the prize and then has the balls to tell the Karate instructor that Karate has lost its punch and now seems more like a “dance”. Infuriated they banish him so he leaves and takes in a protégé to teach his more mean spirited Karate. His protege ends up going of the deep end and gets himself killed while on a rampage. Oyama feels guility for teaching him “evil karate” so gets drunk and kills a guy in a bar fight. Feeling even worse he breaks up with his girlfriend and moves into the house of the wife and son of the man he killed in order to help them with their harvest. His depression finally breaks when the leader of the Karate tournament sends an assassin after him, he decides to take vengeance by taking on the entire school himself.

Going into “Karate Bull Fighter” I was expecting the same comic book style films as Chiba’s “Street Fighter” series (director Kazuhiko Yamaguchi also directed the first three entries into the “Sister Street Figther” franchise spin-off) but surprisingly I was given a slightly more serious film. It still has it’s cheesy moments and instances of extreme violence (a pole through the head for example) but for the most part this is a lot tamer than Chiba’s more popular “Street Fighter” Saga. This doesn’t make it less of a film, just a tad different that’s all.

Well you're probably wondering about the title and slightly humerous poster artwork. Well it’s for a sequence in which Oyama kills a rampaging bull with his bear hands, even ripping one of it’s horns off. This guy is extreme! Only Chiba could have pulled a sequence like this off so well.

“Karate Bull Fighter” ends up being a fine martial arts film and proved popular enough to inspire two sequels making it a solid trilogy (sequels are “Karate Bear Fighter” and “Karate for Life”). Not as over-the-top, extreme or action packed as Chiba’s “Street Fighter” trilogy but a must for martial arts and Chiba fans alike.