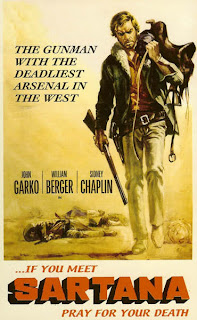 "I am your pallbearer" - Sartana

Ah yes, Sartana. Perhaps the second most popular name in the spaghetti western genre next to the infamous Django inspiring four official sequels and over ten unofficial ones cashing in on the name. The name Sartana first appeared in "Blood at Sundown" and director Gianfranco Parolini and star Gianni Garko loved it so much that they resurrected the name for a completely different character for Garko's next film "If You Meet Saratana Pray for Your Death". This important genre film is where the legend of Sartana begins.

The film begins with a stagecoach being robbed and it's passengers violently murdered (a priest is even shot in the chest through a bible). A long tangled series of steeling the loot and double-crosses leaves the strongbox in the hands of the blood thirsty Lasky. It is now up to Sartana to track down the missing money and to determine who was the mastermind behind the robbery.

Director Gianfranco Parolini was an enormous fan of the James Bond films that were popular at the time so he decided to take that popular character's persona and transfer it to the west. Hence why fans nicknamed Sartana as the "James Bond" of spaghetti westerns. He may not have been a spy but he was calm, cool, well dressed, great at gambling, smooth with the women and even used odd little gadgets like a four barreled pistol.

Actually this character is a lot like Parolini's next film character Sabata with the only difference being Sartana is more serious like the early Connery Bond films and Sabata is more goofy like the later Connery Bond films. To be honest I actually prefer this first Sartana film over Sabata for this reason. Even compared to the Sartana sequels I prefer the dry brooding approach to this film with the sense of humor played down.

Gianni Garko is a terrific fit for the role of Sartana and like Connery as Bond he just makes the character badass. Terrific at his job and looking cool and badass in the process. Typical with Parolini films he likes to give the lead character a somewhat silly sidekick. Here he gives Sartana a sidekick in an elderly gravedigger (dubbed with an annoyingly high voice). These sidekicks of his try to bring some comic relief to the story but usually come out annoying but I will say this character isn't near as annoying as Sabata's sidekick in that character's first film.

"If you Meet Sartana Pray for Your Death" is one of the genre's most popular films and deservably so as it introduced audiences to one of the genre's best characters (perhaps my favorite). Many fans tend to prefer some of the sequels over the original as director Giuliano Carnimeo's sequels tend to be more crowd pleasers but I still prefer the original for its brooding approach. The official sequels go as follows: "I Am Sartana... Your Angel of Death", "Have a Good Funeral, My Friend... Sartana Will Pay", "Light the Fuse... Sartana is Coming" and "Sartana's Here... Trade Your Pistol for a Coffin."

Sartana will return in "I Am Sartana... Your Angel of Death"