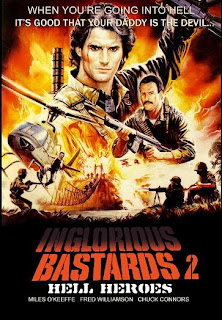 Hmmm.... the DVD box title looks like it has the same sickness as the "Demons III: The Ogre" and "Zombie 5: Killing Birds" box titles in that it is COMPLETE AND UTTER BULLSHIT!!! "Inglorious Bastards 2" my creamy white ass! Nice try Videoasia but I'm not buying it!

Well considering the film has nothing to do with Enzo G. Castellari's 1979 Macaroni Combat cult classic "The Inglorious Bastards", the so called "plot" to this film is actually just a lame retread of it substituting the Vietnam War backdrop in for the World War II setting.

Well Miles O'Keefe is a tough ass soldier that gets in trouble when he gets taped denouncing the war. He gets sent to a military prison camp and when the camp gets attacked, a handful of war criminals escape and kill plenty of Vietcong in the day-for-night shooting. Really I don't recall anything more about the plot, just kill Vietcong and survive.

Though Fred Williamson and director Stelvio Massi teamed up the year earlier to give us the vein burstinly bad "Cobra" rip-off "Black Cobra", Williamson here opts to take a supporting role leaving the lead to the ever worthless Miles O'Keefe. Judging from his amazing performances in such stellar films as "Ator the Invincible" and "Tarzan the Ape Man" we can really expect perfection from his acting. His bad acting is only made more agonizing by atrocious "Clint Eastwood" style dubbing. I almost forgot to mention that old tough guy Chuck Connors makes a small appearance before hilariously getting killed off. I'm not kidding his role is so damn small it might as well have been a cameo.

Director Stelvio Massi proves yet again he really has no creativity left in him as this is just the same by-the-numbers shooting as his last crapfest "Black Cobra." The absolute worst part is that he shoots almost half the movie in that awful "day for night" bullshit. That's when filmmakers shoot "night" scenes during the day but darken the film to give it a dusk appearance. It's a shooting technique that I'm not sad to see leave modern cinema because it never worked for me and it is utilized extremely poorly here as these sequences are almost unwatchable due to it being too dark. Thanks a lot Massi! Nothing like watching action packed machine gun firefights that you can't see.

Since this was a late 80's Italian Macaroni Combat film my expectations weren't really high to begin with but it still managed to not meet those subbasement expectations and instead of being trashy entertainment, it just came off tedious. The film wasn't helped by it's odd framing on the DVD release as it looks like the 25% of the lower half of the letterbox picture is missing. Since the day-for-night shots made half the film too dark to see anyway I don't think I missed a whole lot with that missing 25%.

Bonus Rant: My brother pointed out the hilarious tagline on the DVD box artwork that I never paid attention to. Believe me it's the only thing truly entertaining about the film.