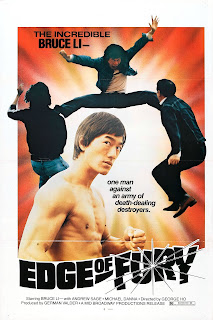 It seems that when Bruce Li makes films that have no reference to the actual Bruce Lee that they aren't actually too bad, by trashy martial arts standards that is. Films like "Edge of Fury" prove that Bruce Li can actually stand on his own without the shadow of Bruce Lee looking over his shoulder. He's a damn fine martial artist in his own right and it's a shame he didn't make more films in the mold of "Edge of Fury" where he can be himself.

Typical martial arts plot with plenty of good fight sequences provided by Li. The dubbing is unusually bad (what's with Li being dubbed with a British accent?) and the development between him and his girlfriend is incredibly weak, like in almost nonexistent. Then again who gives a shit about character development, this is a Bruceploitation film god damnit! The fights are great and that's all that counts!

If you like these type of trashy martial arts films (you know who you are) then I recommend "Edge of Fury" as it is a cut above most of the films in the notorious Bruceploitation subgrenre (especially those Bruce Lee biopics... barf). The DVD I have from Echo Bridge Home Entertainment is a watchable pan and scan VHS transfer (no doubt taken from the old Paragon VHS release). When I say watchable I mean people who can handle, oh my god, VHS quality! The phrase "VHS transfer" seems to be a death curse in today's high tech society so blu-ray enthusiasts need not apply. Hey I prefer crystal clear widescreen transfers as much as the next movie buff but for these rare films sometimes you have to take what you can get and watchable VHS transfers is fine for this cult film buff.