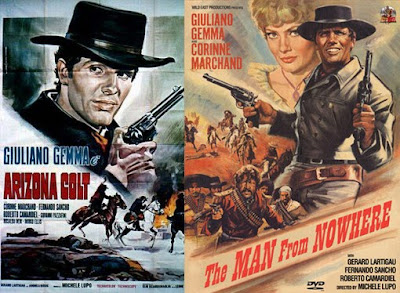 I have seen damn near 100 Spaghetti Westerns in my day and to be honest I thought I had seen most of the "must see" films the genre had to offer as I was left sifting through the bottom of the pool sucking in the left over films that were entertaining enough for the extreme genre fan but nothing to get excited about. Just when I thought I had seen all genre "must sees" I then laid my eyes upon "Arizona Colt", an extremely entertaining picture from the golden age of the Spaghetti Westerns (late 60s) that was tailored perfectly for star Giuliano Gemma. After viewing a number of lower grade films the genre had to offer I ate up Arizona Colt hungrily.

Arizona Colt is a likable smartass bounty killer who happens to be around when a ruthless gang of Mexicans break a number of inmates out of a prison. The leader of the gang, a tub of lard named Gordo, forces all the inmates to join his gang but Colt refuses and plays deadly practical jokes on the gang in the process of them trying to kill him. One of the gang members strangles the daughter of a wealthy bar owner in a local town so Colt agrees for $500 and the owners other daughter's hand in marriage to kill the brute. He does, but not without almost dying himself but is saved when a drunk named "Double Whisky" saves his life. Now he needs to save the town from the sadistic force of Gordo's gang and win the heart of the women he has his sights on.

To be honest I wasn't real keen with Giuliano Gemma when I first got into the genre as he had a little too much boyish charms for my taste of a Spaghetti Western hero. However over time the bugger has grown on me and now I like him quite a bit as he is a decent actor that has a wonderful ability to do great fight scenes. Gemma used to be a gymnast and stunt man and it shows as this film is tailored to his abilities with him wonderfully pulling off his own stunts and fights.

Gemma fits the character of Arizona Colt well by giving the character charm, smartassery (is that even a word?) and even a deadly edge. The character isn't just your average "think of myself" antihero as his character goes through an array of emotions and character twists throughout the film making the character more interesting than the average genre protagonist.

The "sidekick" character Double Whiskey is rather cliché and offers the film it's needed comic relief but the character is still likable and the rest of the cast is made up of seasoned genre vets that hardcore Spaghetti Western fanatics will recognize from multiple other films.

"Arizona Colt" (released in America as "The Man From Nowhere") is definitely one of the last unsung Spaghetti Western films that is a definite watch for fans of the genre. It maybe a little cliché at times but it's far better than the majority of the films the genre has to offer and Gemma is likable as ever. The character proved to be popular enough to warrant a sequel entitled "Arizona Colt Hired Gun" which was released four years later without Gemma returning. Released on DVD by Wild East as "The Man From Nowhere" and later by them in a double feature with its sequel under the "Arizona Colt" title.