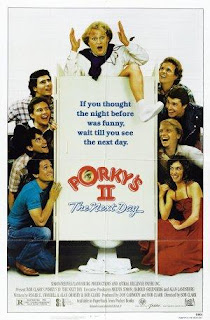 With “Porky’s” being the huge hit it was with the younger crowd a sequel would be inevitable.... a sequel we all knew wasn’t going to be near as good. Making a good sequel would be a challenging feat due to the premises of original being paper thin. I mean how long can they drag on a premises of high school guys wanting to get laid without the shtick getting old? Not long that’s for damn sure as “Porky’s II” came out disappointing even with expectations already low.

Director Bob Clark desperately tries to throw new interesting themes into the mix but nothing really jelled together. All these interesting villains don’t work if the film isn’t funny and trust me, there isn’t much funny about this sequel. Some sequences try desperately to be as funny or memorable as similar sequences in the original but they all fall flat.

There is really nothing memorable about this movie. Ask people about sequences in the original film and they can rattle them off like a grocery list but ask them about part 2 and all you get is “ummm.... is that the one with the KKK.” Yea, that’s it. The poster artwork tries to make the snake sequence in the toilet the main comedy attraction but it doesn’t hold a candle to anything from the original.

“Porky’s II” proves again that even the original director can’t always save a sequel. Bob Clark seems to be as disappointed with this film as the fans were as he never talks about it in interviews. He tries hard here but it’s nothing more than another disappointing and forgettable follow-up. Even so it still made a killing at the box office so “Porky’s III” wasn’t too far behind.