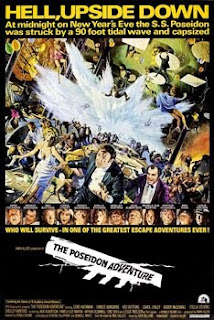 Though "Airport" started the disaster film craze in the 1970's, Irwin Allen's big budget 1972 disaster epic "The Poseidon Adventure" perfected the formula that every disaster flick would follow throughout the decade. Though they would follow the mold none would touch the near perfection of this water logged thriller.

Thanks to the recent remake, the plot is again well known to the movie going public and to make it simple it's about a luxury cruise liner getting capsized by a tidal wave that was caused by a nearby earthquake. Now a handful of survivors are in a race against time to get to the bow of the ship before explosions and slowly rising water extinguish their lives.

Though the plot is simple, the grand part of this epic is the cast of seasoned veterans. This cast is terrific and they give the film their all! Gene Hackman proved to me yet again why he deserved multiple academy awards with this strong and commanding portrayal of a preacher leading a group of people to safety. All these great actors play a wide array of characters with different personalities which ensures plenty of emotional turmoil and scuffles along the way.

Director Ronald Neame masterfully crafts dramatic tragedy sequences without going over-the-top and making them unintentionally cheesy like most of the disaster epics later would succumb to. He also balances out the tragedy with some well-placed humor to break up the high tension (the suppository dialogue had me rolling). I also have to praise him for his camera work. Do you suffer from sea sickness? If you do then you might want to skip this film (or make sure to take your suppositories!) as he constantly has the camera swaying back and forth almost constantly give the motion of the ship. His camera work really gets the audience feeling like they are in the film themselves.

Along with great acting and directing we are also graced with wonderful special effects. These are truly some of the best model effects I have ever seen. Model effects in water are the hardest to portray realistically due to water being hard to make look to scale but they pull it off here effectively. The production design is also massive with wonderfully upside down built sets that our survivors have to meander through.

When it comes to 70's disaster films, for my money, "The Poseidon Adventure" is king of the pack. It's near perfect with amazing directing, strong acting, colorful cast (look for Leslie Neilsen in a serious role as the ship's captain), great effects and mesmerizing production design. A true epic of its time and surprisingly still holds up well today not being near as dated as one would expect (unlike "Airport").

Irwin Allen would follow-up with another big budget disaster production two years later with "The Towering Inferno" before directing a lamentable sequel in 1979 with "Beyond the Poseidon Adventure." Later remade as a 2005 miniseries with the same title and then again as a big budget box office disappointment in 2006 with the title shortened to "Poseidon".