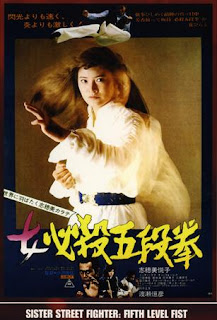 Here is the real black sheep of the "Sister Street Fighter" franchise as it is an 'unofficial' sequel. Unofficial is still an awkward word used to describe it as it is still made by Toei Pictures, the production company behind the first three films so in reality it is 'official', it just wasn't originally made to be an entry into the franchise. This will be VERY evident for fans as this film has a completely different feeling when watched following the others.

Etsuko Shihomi returns playing a different character and she helps her best friend avenge her brother's murder and aid some INTERPOL agents stop a drug ring being run out of a film studio (Toei Pictures studio being used as a cheap backdrop).

The story may be like the other "Sister Street Fighter" films but gone is the over-the-top comic book tone of the first three for a more crime drama approach intermixed with martial arts action. The tragedy sequences are broke up awkwardly by an international cast that go between English and Japanese. Also gone is the exploitation elements and this film lacks the appealing blood, nudity and violence giving us more of a standard martial arts adventure with an ending that fails to satisfy.

This is still a good martial arts film in its own right but it comes under scrutiny due to its title connecting it to an established franchise that has a completely different tone and feel. To be honest this is actually a better made film with better characterizations and a more cohesive story but it just lacks the over-the-top entertainment value of other such martial arts films from the Toei factory. Fans will find a good martial arts film here but they have to look beyond the title and expect something different.

Note: This film is only available in "The Sister Street Fighter Collection" available on DVD. The set is out-of-print but can still be purchased at a really low price.