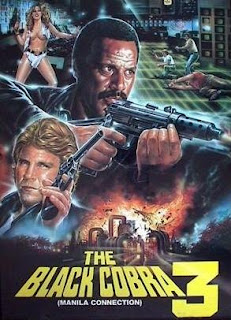 I believe the idea for "Black Cobra 3" came about a mere minute after "Black Cobra 2" wrapped. Director Edoardo Margheriti no doubt said to Fred Williamson in his thick Italian accent "Hey, I had fun doing this cheap action drek. Want to do another one?" to which Williamson replied "Fuck yea! I got to pay for my special cigars as they don't come cheap!" Margheriti then responded "Great! We'll have a script banged up by Friday" and thus "Black Cobra 3" was born rounding out a complete trilogy (despite there "technically" being 4 films... more on that later.")

Like the last picture this zero budget Italian actionsploitation epic was filmed in the Philippines so we have to get Lt. Robert Malone back into the country some how. Well for plot convenience he has a cousin that works as an INTERPOL agent in the Philippines that gives him a call one day out of the blue to come help him with an arms smuggling ring. Malone happily agrees and the rest of the film is espionage and jungle shoot outs as Malone and his two partners sneak into a hidden compound.

Surprisingly this sequel feels far more like a Macaroni Combat picture as opposed to a Poliziotteschi picture like the first entry. I mean we have jungle warfare and machine gun fire up the ass... sounds like a typical Rambo inspired Macaroni Combat picture to me! Well the first film ripped off "Cobra" so why not rip-off a different Sylvester Stallone picture? I actually enjoyed this new approach, perhaps I just haven't had enough Macaroni Combat in my diet of late?

Since this was filmed basically back-to-back with the last film and has the same director at the helm that it shouldn't be surprising that it has the same look and flaws. Interesting camera work: Check. Poorly choreographed fist fights: Check. Extremely bad acting: Check. Long sequences of characters walking: Check. Entertaining as fuck: Check. What can I say, I have a soft spot for these zero budget Filipino shot Italian films.

Other than the new Macaroni Combat plot and approach, "Black Cobra 3" comes out being exactly what you would expect from Fred Williamson and crew. Fans of these Italian Z-grade action films will find plenty like. Sadly this was second to last Italian film Williamson made as the Italian film market would crash not to long after, no doubt due to films like the "Black Cobra" series. Still it was fun while it lasted.

Whoa... I almost forgot, this ISN'T the last "Black Cobra" film...errr... technically at least. Not long after cult director Umberto Lenzi would direct a fourth film entitled "Detective Malone" but surprisingly it doesn't have Williamson in it. Instead they used stock footage of Williamson from the previous 3 "Black Cobra" films to intermix into the newly shot footage while using stand-ins for Williamson every once-in-while. For that reason I'm dying to see it but it's hard has hell to come by. On a funny note I had a buddy meet Williamson at a film festival and he said the fourth film was a "bunch of shit." Fucking great! That just makes me want to see it more!