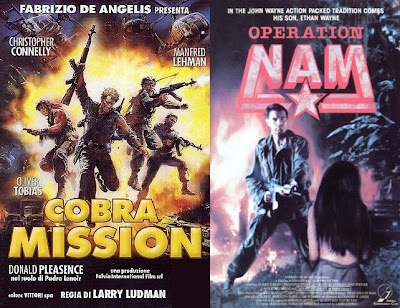 Another throw-away later 80's Italian Macaroni Combat flick but what kills me is that this film had some real potential to be a kickass action movie with an actual director at the helm. I mean look at the cast. It's an Euro B-movie fanatic's dream come true! Christopher Connelly and John Steiner are enough to get any Italian trash fan interested but on top of that we have Donald Pleasance and Spaghetti Western great Gordon Mitchell. Fuck! Why didn't Enzo G. Castellari direct this damn thing? Speaking of him, he makes a cameo as a Major in this picture. He had the time to make a cameo so why didn't he take the reins of this train wreck and make something actually enjoyable out of it?

Well following the huge box office success of the "veteran going back to 'Nam to rescue POWS" flicks "Missing in Action" and "Rambo: First Blood Part II" the Italians weren't too far behind to jump on that bandwagon. What we get here is a trio of Vietnam vets that are bored by their everyday lives. Connelly is especially annoyed by his wife and daughter's spoiled lifestyle so he and his two war buddies take it upon themselves to meet up with their old major and head back to 'Nam to rescue some POWs. Not surprisingly their secret "Cobra Mission" (a name that really pertains nothing to the plot) isn't easy and lots of bullets fly.

The guy in charge of this mess is producer acting as director Fabrizio De Angelis (using his Americanized pseudonym Larry Ludman). He gave a shot at directing such films as the "First Blood" rip-off "Thunder Warrior" (he would go on to make three of those damn things) and the "Dirty Harry" rip-off "Deadly Impact" and proved by the result of those films that he should stick to solely producing flicks and letting his buddy Enzo G. Castellari direct them. This guy has no fucking style and makes this flick a bore to look at. Even Castellari at his worst at least made his look interesting. Not Fabrizio.

The only thing that kept me going though this picture (suffering the horrible 88th generation VHS transfer to DVD) was the cast as I do enjoy Christopher Connelly and John Steiner as they show their faces in a gazillion cult Italian genre films and their presence usually is enough to bring a smile to my face. Sadly the poor directing style ruined any charm these genre actors had to offer. People may also be interested in the fact that Donald Pleasance appears in the credits but trust me, it's a thankless small role that barely qualifies as a cameo.

"Cobra Mission" may not be the worst Macaroni Combat flick in existence but it's definitely on the lower tier despite its solid cult cast. I perhaps may have enjoyed it more if I was able to get my hands on a an actual watchable copy. I grew up in the VHS generation and I have no problem with VHS transfers of obscure films like this but this specific VHS transfer found in a VideoAsia multi-film pack is almost unwatchable: blurry beyond belief with digital flakes. Considering the film rather sucked I highly doubt a better version will ever become available. "Cobra Mission" (released in America as "Operation Nam") must have made more money than I thought as a sequel followed in 1989.