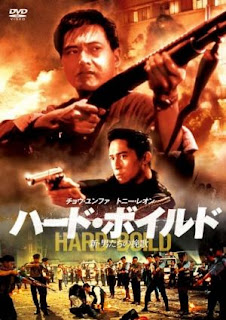 A combination of director John Woo, a stunning cast, bullets, a crime story with triads and undercover cops, and a hospital siege obviously is a concoction of pure awesomeness. Oh, in all reality, Hard Boiled is pretty over the top and occasionally cheesy, but I'll be damned if it isn't a spectacular ride whose adrenaline shots and pure anarchic final act well make up for its faults. This is John Woo at some of his most balanced, igniting the screen with the film's iconic action sequences and giving it an emotive back story that embraces its over the top aspects as gold rather than a burden to overcome.


Tequila, yes that is his name, (Chow Yun Fat) is a tough as nails cop doing his best to pull the rug out from under a gun smuggling crisis in the triads. When he loses his best friend and accidentally kills an undercover cop, he starts to lose it a little and gets a little...hard boiled. Suddenly, he finds himself in the middle of a triad gun war. When another undercover cop teams up with him, they finally may have the edge they need to take down the racket. Bullets will rain and pain will be plentiful when these two cops get together to take down a ruthless gangster.

Even in 1992 this sort of 'crime drama' story line was getting cliche. Hard Boiled runs the gauntlet of hitting most every cliche you are going to see in an action film from the late 80s and early 90s and it does so proudly. At times its even a bit to ridiculous for my tastes (getting the babies out of an exploding hospital takes the cake) and on some level its something that does hinder this film from being a perfect action experience in just the basic predictability of its narrative and plotting.

On the other hand, every piece of this film truly plays it off as if its the greatest tale ever told. The acting is done completely without tongue-in-cheek, the ridiculous plot elements are played straight as the Tequila shoots, and John Woo builds this film like its a graceful Shakespearean tale of tragedy. It's this part of Hard Boiled that actually makes it work so damn well. It focuses on the great elements of the film/story and doesn't acknowledge when its out of place (like how many people leap through windows in this film) and it makes the audience overlook them too. It helps when the casting is so damn stacked. Outside of the iconic Chow Yun Fat, Tony Leung brings a grace and dramatic heft to the film and Anthony Wong and Philip Kwok bring some serious crazy villains to life in badass ways.

Of course, in true John Woo fashion, Hard Boiled has some of the greatest and well choreographed action sequences ever filmed. I would even go as far as to say the final siege on the hospital is one of the greatest gun fights ever put to film. This sequence is only highlighted by a seriously long one take shot that incorporates a multi-floor shootout with our two leads and a plethora of baddies that feels like a stunningly well developed arcade shooter level. The action in this film is to die for (no pun intended) and easily the best reason to watch it. From beginning to end, it's littered with iconic sequences, shot on a swiveling eye by Woo, and given the heft of an art form that has never seen this level. It's truly brilliant.

Hard Boiled may have helped change how action films were done in 1992, but it still holds up ridiculously well even today. It might be cheesy and occasionally out there, but its serious tone and amazing action sequences more than make it a must have in any collection. John Woo was able to produce a handful of action masterpieces in his time (particularly this era), but Hard Boiled may reign supreme among them all.