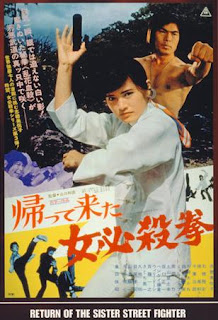 Not wanting to keep their fans waiting, Toei Pictures quickly pumped out yet another sequel to "Sister Street Fighter" in a short matter of time. Again like the second film "Sister Street Fighter: Hanging by a Thread" it goes against the norm of being extremely flawed due being made quickly and somehow matches the first two films in its lovable exploitation martial arts quality despite also having the EXACT same basic plot as the first two films.

Our street fighter is told by a family member that her cousin has disappeared so while investigating she discovers she has been taken captive by a crime lord to be his personal love slave. Now she has to taken down his smuggling ring of transporting gold in nitric acid while simultaneously saving her cousin's life for her daughter's sake.

Like I mentioned this plot is VERY derivative of the two films before. Instead of smuggling heroin or diamonds, it's now gold (though it's not as 'creative' as smuggling the diamonds in girls booty as featured in the second film). Instead of finding her missing brother or best friend, now it's her cousin. If you watch all three films back-to-back these similar plot lines can get OLD fast. One actor who returns from the second film has his character give the EXACT same plot twist towards the end. Come on guys! Give us something new!

Even with the plot being so derivative, series director Kazuhiko Yamaguchi still manages to keep the fast furious pace mixed with that loveable comic book quality that he was so good at with the first two films. My only complaint in this department is that he opted to have this film be a little less bloody, negating the exploitation charm just a hair.

Though the plots are all the same, these "Sister Street Fighter" films manage to make a very solid series with the quality staying about the same throughout. Actually they are actually so much alike (and filmed so close together) that they tend to blur together after time. This would mark the end of the official "Sister Street Fighter" trilogy but another film starring cute-as-a-button ass kicker Etsuko Shihomi would get titled "Sister Street Fighter: Fifth Level Fist" to cash in on the franchise.