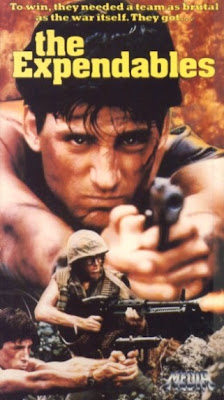 Chances are you clicked on this review out of curiosity after looking up the review to Sylvester Stallone 2010 all-star actionfest "The Expendables." First off that film is NOT a remake of this. This "Expendables" is another trashy Filipino Vietnam war from the Cirio H. Santiago factory. Is it better than his first 'Nam epic "Eye of the Eagle"? Yea.... but when films are this bad, one that's a hair better than the other just doesn't mean a whole hell-of-a-lot.

Capt. Rosello is getting a lot of shit from his Colonel. Sure he completes his missions but in doing so he gets a high casualty count. The Colonel then assigns him a bunch of misfits, known as "The Expendables", meaning if they die it doesn't matter much. Sure the captain and the platoon bicker at first but they soon come to respect one another as they head out on their final mission to kill an escaped VC colonel and rescue some kidnapped nurses.

Typical with Santiago 'Nam epics there are millions of bullets shot and a lot of sequences of soldier's dying in slow motion, trying to heighten the emotional response of the audience. Thanks to non-existent character development and hard core overacting the scenes just come out unintentionally funny.

Overacting is an understatement for this film. Anthony Finetti (whom you might remember from a single episode of 90210... really this guy hasn't done shit) takes his acting a little too seriously for this B-movie quickie and his acting hits unintentional hilarity as he spouts such well written lines "quit eye fucking me soldier!" with serious fervor. At least "Eye of the Eagle" had some cast members you could recognize... not here. The only guy I recognized is William Steis as the Colonel only due to the fact I just watched him the Cirio H. Santiago horror shitfest "Demon of Paradise" the same night as this. Trust me I'm the only douche in the world who would recognize this guy.

"The Expendables" is just another trashy Filipino Vietnam war film that's only claim to fame today is that it has the uncanny connection to the new Sylvester Stallone film by having the same title. Most people will find this cheap and just a waste of time but I have an addiction to films like this. Even if they are shitty I lap up obscure trashy films of this nature. Thanks to Stallone's film this 1988 "forgotten piece of coal" (I can't call it a "forgotten gem") got released on DVD. The DVD release in a VideoAsia multifilm pack is a VHS transfer of an Asian VHS with burnt in Asian subtitles. You know you're watching forgotten trash when the only DVD release it gets is transferred from an Asian VHS...