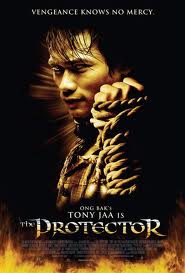 Here at Blood Brothers we love to watch things that fall under the category of BADASS. Now this category can cover a variety of things and a multitude of different ideas that can be determined as badass, but there is one man that is reshaping the category. His name is Tony Jaa. If you are a follower of this site then you may have read my previous review for "Ong Bak 2", but even that film fails in comparison for badass-ness when it's matched against "The Protector".

Kham (Jaa) has little in his life to take pride in. He has his family, his elephants, and his insane martial arts abilities. That's it though. So when a trade at a Thai market goes wrong and his two elephants, including a baby one, are kidnapped, he has to fly to Australia to hunt down the people responsible for his elephants' disappearance. *Let's take a moment for that plot to sink in...yeah...go with it.* Unfortunately, what he finds in Australia is a vicious animal smuggling ring that is going to take a lot of broken bones to bust up. Luckily, this Thai fighter is damn close to super human. How many will suffer for the animals that suffered? All of them! At the hands and knees of Kham!

Now the plot for "The Protector" is pretty damn stupid. I'll be the first to admit it. Jaa runs around screaming for his baby elephant for a majority of his dialogue and the animal smuggling ring sounds like something even Cannon Film would reject. Here's the kciker with this movie though. This is very important, so follow closely. THE PLOT IS COMPLETELY IRRELEVANT. It's just an excuse to get Jaa into different random situations, which are in themselves irrelevant to the plot, where he gets to kick a whole lot of ass. This, of course, is completely okay with me. Let him wander around like a modern day Ryu (that's a "Street Fighter" reference for those who don't play video games) and just beat the shit out of everyone. That's what I got this movie for anyway.

This brings me to what this movie is about...kicking ass and taking names. This movie is filled with so many awesome fights, stunts, and general baddie beat downs that it breaks the badass meter. Flying into a room to knee a guy in the face? Check. Kicking out the bulb on a street light for no apparent reason? Check. Back flipping off of a window as an ATV smashes through it? Check. Battling a group of punk BMXers with florescent lights? Check. Leaping off of a skyscraper to knock a person off of a helicopter? Check. A large steroid ridden mountain of a man picking up a baby elephant and throwing it across the room? Check. The list just keeps fucking going! Not to mention Tony Jaa makes it look so damn easy. He makes front flipping off the roof of a van look like a casual stroll through the park. It's ridiculous!

Is "The Protector" bad? It is if you are looking for a movie with plot or characters. Luckily, this movie never bothers with that below surface level. It's like a stunt fight extravaganza highlight reel for Tony Jaa and should be watched as such. If you are a film fight fanatic (like we are) then this is a must own and must watch...like every day.

BONUS PRAISE: The sheer awesomeness of the floor climbing fight sequence in the tower is something to rewind and watch over and over again. It's moments like that which put American action films to shame.