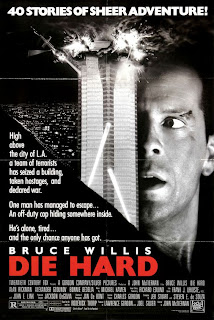 Yippee kay yay mother fuckers! It's "Die hard" season here on Blood Brothers. What makes it justify as "Die Hard" season? Nothing, just because I said so. That and we had requests to review the franchise. So here it is, the first and still the best... DIE HARD.

"Die Hard" has a New York cop John McClane traveling to L.A. to visit his kids and wife who has nailed very high class job working for a foreign administration building. After bickering furthering their marriage problems while in her office within a high-rise building, some German terrorists invade the complex taking everyone hostage in order to rob the owner of some "bonds." McClane eludes capture and sneaks around the skyscraper donning a wife beater and no shoes taking out bad guys one-by-one with some more support from an average cop below. The result is hands-down one of the best action thrill rides ever made.

When I was a kid I lived, breathed and bled the "Die Hard" trilogy (it was only a trilogy at that time). What made me love the first film so damn much is that it offered a different type of hero in cop John McClane (atypically casted with then relatively new Bruce Willis). Up until "Die Hard" all action heroes seemed to be the Clint Eastwood mold, the strong silent types . In the 80s these type of heroes went over-the-top and seemed superhuman with their muscles and abilities thanks to the likes of Stallone and Schwarzenegger. "Die Hard" brought the action hero down to a normal, human level making McClane an ordinary man in extraordinary situations. He's not always calm or collected and doesn't know exactly the right thing to do at the any given moment. He panics and makes hasty decisions at some moments liken any normal person. This more human side is what makes the character more identifiable to audiences.

In making McClane an everyday man the filmmakers brilliantly casted Bruce Willis in the role. Up until "Die Hard" Willis had gained some fame by appearing in the romantic comedy series "Moonlighting" so "action" wasn't the first word one thought of when they saw Bruce Willis but that's what makes him so damn perfect for the part. He's not a body builder or even have a full head hair but again that makes him more human.

Bruce Willis is also surrounded by fantastic actors bringing everything they have to the roles. Bonnie Bedelia is believable as the successful, bull headed wife, Reginald Veljohnson is surprisingly good as the grounded cop giving McClane support but the guy that steals the show is Alan Rickman as our head baddie Hans Grueber. He's intelligent, he's sophisticated, he's charming and of course extremely deadly. Perhaps a picture perfect villain for a "Die Hard" film.

Director John McTiernan proves he's the right man to helm this high budget complicated action fest as he loads the film with competent filmmaking and a great style. His directing talent mixed with Willis' marvelous additions to the character makes this a film that moves at a hundred miles an hour despite it's over two hour running mark. I also love how McTeirnan took the time to allow little quirky comedy segments to make its way into the film, like how McClane balls up his feet to stop airsickness and even smaller scenes like a henchman who eyes and steals a candy bar right before a police raid. Wonderful!

"Die Hard" is quite simply one of the best action films EVER made. Everything about this film is tops from the acting, directing, scripting, score, editing and so on and so forth. The script allows our hero to be more human and flawed while allowing the far-fetched plot to actually come out somewhat believable. It's filled with uncountable memorable sequences (the glass in the foot still makes me cringe) and to top it off it is absolutely thrilling from start to finish. I don't see how any action film fan in their right mind could not like this film. Audiences and critics agreed and "Die Hard" was a smash hit spawning three sequels ("Die Hard 2", "Die Hard with a Vengeance" and "Live Free or Die Hard") as well as numerous copycats resulting in descriptions like "Die Hard on a bus", "Die Hard on a boat" and fuck probably even "Die Hard in space." It changed the way action films were made and how action film heroes were portrayed and no matter how many sequels or copycats they make, the original will always be the best.