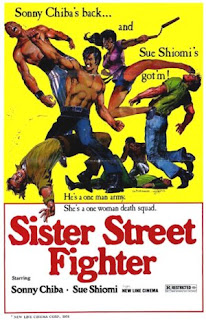 After the immense success of the Sonny Chiba vehicles "The Street Fighter" and "Return of the Street Fighter", Toei Pictures decided to provide the hungry audiences with a female spin-off which in turn turned out to be just as popular and spawned a series of films itself. The final result may not be as good as Chiba's outings, but it still manages being a very entertaining comic book martial arts fest brimming with lovable exploitation elements.

Etsuko Shihomi portrays the title character as she gets hired by the police to help them find her missing brother who somehow has ties to a drug cartel that smuggles heroin in, get this, wigs! The mission won't be easy as our drug lord has a plethora of different fighters to take sister street down, including 'Amazon Seven', an all girl squad who dress like cave women!

Etsuko Shihomi was a perfect choice for the role as she is both a tremendous action star but also one of the most attractive Asian women I have ever laid my eyes upon. I'm a sucker for beautiful women that could kick my ass. Apparently she was not the first choice for the role as the character was originally offered to actress Angela Mao who gained a small following by playing Bruce Lee's sister in "Enter the Dragon." She ended up passing on the project so the role went to Sonny Chiba's star pupil at the time who was just barely 18 years old. Not only did she have one the greatest martial arts teachers proving she knew here karate but she also had the ability to do all of her own stunts. Did I also mention she's amazing to look at?

Like the "Street Fighter" films, this spin-off weaves plenty of exploitation elements into the mix when it comes to nudity, extreme violence and gore. These elements is what makes me enjoy these Japanese martial arts films more than their Hong Kong counter-parts as they are a little more in bad taste. I'm sorry but I'm a sucker for when a guy hits another in the face and he spits out teach and blood. I wouldn't say this is more violent than Chiba's films (I mean "The Street Fighter" was the first film ever to garner an "X" rating just for violence) but there is still plenty of extremely violent moments with flowable red liquid. Look for the guy who gets his head completely twisted around.

Inexperienced director Kazuhiko Yamaguchi was given the reigns of this film and he knows how to give it that lovable comic book feel with shaky, fast zooms. His flow the film is somewhat incoherent but then again we don't watch these type of films for coherency. We watch them for violence, bloodshed, and kick ass martial arts and this film delivers on all those accounts.

Fans of Chiba will see a cameo with him in a supporting role but he doesn't play the same character he did in the "Street Fighter" films. Why would they do that? This is a spin-off so have him show up as the same character damnit! It's nice to have Chiba in any film, even if it is just a cameo, but it royally annoyed me they didn't have him return as the same God damn character.

Note: Like Chiba's "Street Fighter" series, "Sister Street Fighter" has also fallen into public domain hell here in the United States so there are plenty of shitty discs available to buy. Unlike Chiba's films, "Sister Street Fighter" has been given a few official, high quality releases from BCI Eclipse in three separate sets. The first version which only contains the English dubbed audio track is available in two separate releases: Welcome to the Grindhouse: The Bodyguard / Sister Street Fighter double feature and The Sonny Chiba Collection box set. A slightly better one which contains both the English dub and the subtitled Japanese version was also released in a box set entitled The Sister Street Fighter Collection which also includes all three sequels. All these releases are out-of-print but can still be obtained at very low prices. Just remember that are the only version worth getting in the United States, all others are complete crap!