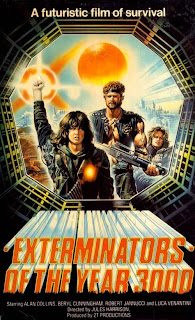 Listen up you 'mother grabbers'! Looking for an entertaining trashy Italian post-apocalyptic film then look no further than "Exterminators of the Year 3000", easily one of the 'best' of this interesting little subgenre.

I have to talk right away bout the year "3000" in the title as I think this is a tad too far in the future for such a film to take place. I mean I highly doubt the 1970s and 80s cars our warriors drive would hardly be running a millennium later not to mention gas still being good. Other brain dead post nuke flicks like "2019: After the Fall of New York" and "2020: Texas Gladiators" made their years realistic so what were the filmmakers smokin'? Did they really think that the year "3000" would sound more badass? Then again "Battlefield Earth" proved to me that cavemen could learn to fly 1000 year old harrier jets with 1000 year old jet fuel and defeat an alien race that originally conquered the Earth after only a measly 3 minute fight so anything is possible.

Well the year 3000 proves to be a hellacious year to live in as water is in short supply (though gas is in abundance ironically but that would be just copying "The Road Warrior" and they wouldn't want to rip off that film too much now would they?). A group of peaceful humans are running out of their water supply so they send tankers (sound familiar?) to gather some from a secret area until they are hijacked by a group of ruthless road gangs. A boy escapes and comes across a asshole antihero named Alien (played by Robert Iannucci) and somehow convinces him to help his group find the water.

It may be a trashy rip-off of "The Road Warrior" but other than the high octane chase in the beginning, one must not expect this to be a furious road chase post nuke flick. This is actually more reminiscent of a spaghetti western (the director is a veteran of that once popular subgenre) so this is a lot more slower paced than other films of the kind. The tanker truck hijacking is actually more reminiscent of a western stage coach robbery as the "chase" is so incredibly slow, unintentionally funny in its slowness.

The supporting cast is made up of recognizable faces for fans of Euro cult cinema but the choice for our hero "Alien" (god what an awful name) is a model by the name of Robert Iannucci. What is with Italians picking models for their lead roles in these post nuke flicks? Michael Sopkiw in "2019" was also an ex-model. Yea, when I think of post nuke flicks, I think of ex-models in the lead anti-hero role. Sheesh.

Other than lacking high octane car chases (except for the beginning), I found this to be a highly enjoyable trashy Italian film with bad dubbing, hilariously poorly translated dialogue ("Mother Fuckers" is translated as "Mother Grabbers") and wonderfully bad acting. A film with a anti-hero named 'Alien' and a girlfreind named 'Trash' has to have at least some guilty pleasure aspects. A definite must for Euro cult fanatics!

Bonus Rant: My bonus rant has nothing to do with the movie but for people who refuse to buy the DVD. Code Red (one of my favorite companies) released the film on DVD but with one flaw, it's only in Full Screen. Sadly I've run into numerous people who refuse to buy the DVD for this reason. I just have to say FUCK YOU to these posers. Code Red was forced to transfer full screen print as that was the only print that was provided to them from the copyright holder. The cost of hunting down a widescreen print would not warrant the cost as a film of this nature would not be a high seller on DVD. Sadly the DVD business is about money and if the media companies don't make money then why put it on DVD at all. Yes it may be full screen but at least it's on DVD you schmucks! It's far better than having a worn out VHS that could break on you any moment. To these people I have to say pull your dicks out of your blu-ray players, buy the damn DVD and support Code Red so they can release more cult classics of this nature. Click here to buy the DVD already!