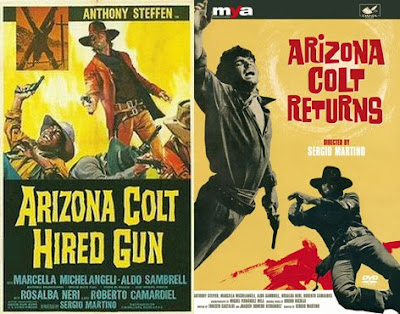 Yes, this is an official sequel to the 1966 Giuliano Gemma film "Arizona Colt." You wouldn't get that inclination by just looking at it as the major recasting of the role with Anthony Steffen makes this look more reminiscent as another one of those westerns that merely uses an established character name to fool people into thinking this was a sequel reminiscent of all those damn "Django" and "Sartana" films. Nope, it's hard to believe but this is the real deal, the one, the only official sequel to "Arizona Colt." Even though it's official don't go into this expecting the same type of western as most of the cast and crew from the original are replaced making this only seem like a sequel on the surface.

Well our Arizona Colt with a new face is kicking it back with sidekick Double Whiskey (Roberto Camardiel. returning to the role from the original film) when he gets news that someone has set him up to make it look like he killed a station full of people. Now wanted by the law and ready to be hanged, Arizona fakes his own death and high tails it to take down the ruthless gang that set him up.

Though an official sequel, the recasting of the role with Anthony Steffen completely changes the character. Steffen plays the role opposite of Gemma making him a stoic, silent anti-hero reminiscent of Eastwood's 'Man with No Name' portrayal as opposed to the likeable smartass approach that Gemma brought to the character. Normally I like the stoic, silent anti-heroes more in these genre films but Steffen just makes the character rather boring and uninteresting.

Roberto Camardiel is still likable as the comic relief sidekick Double Whiskey but his character can become a bit wearing at times with all the damn whiskey comments. Okay, we get it, his character likes whiskey! That shtick gets old real fucking fast.

Compared to the original this film looks to have a much lower budget as it's just not grand or epic looking. Also the great grander score of the original is opted out for a silly song with humorous, yet ridiculous lyrics.

This sequel is more famous for being one of future Giallo specialist Sergio Martino's first films but even he can't make this enjoyable enough to get around its incredibly cliché plot and boring lead character makes this a more average spaghetti western compared to the first film. In reality they might as well have made this a completely separate film thanks to Steffen completely changing the character but overall this is still a good watch for fans of the genre.