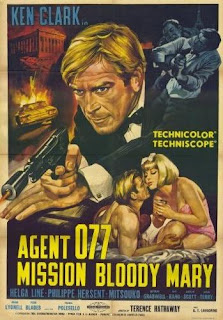 Since my brother reviewed the golden Cadillac James Bond 007 film series, I found it perfectly fitting for me to review Italy's low budget rip-off trilogy featuring the suave, cool headed secret agent 077. I find the term "rip-off" to be a tad harsh here as this actually isn't a bad film at all. We'll use the term "inspired" instead to be nice.

Well back in the 1960s the Beatles ruled the radio, Batman ruled the television and Bond ruled the cinemas. Bond films were the box offices biggest draws but Albert Broccoli and Harry Saltzman couldn't produce the films fast enough to fill the need by audiences so Italy was gracious enough to lend a hand and release a number of "inspired" films themselves, the most popular being the 077 trilogy (subtle weren't they picking that for his code number?). Being a hardcore Bond fanatic as well as a connoisseur of Italian films, these Bond "inspired" films are a combination made in heaven for this cult film fanatic. Heaven was exactly what I got as this first 077 adventure is a perfect mixture of a gritty Spaghetti Western and James Bond thriller.

Ken Clark plays our Bond clone agent 077 but instead of working for the British Secret Service, he is American and works for the CIA. 077 is on the trail of a stolen nuclear weapon device but not surprisingly he's not the only man who wants to get his hands on it. Nipping at the back of his feet are the Russian and Chinese secret service. Espionage and action are sure to come as well with interesting twists with "what side are they on" moments.

All the staples of Bond films are here: eye catching title sequence, car chases, spies in tuxedos, exotic locations, fights sequences, gorgeous women, wonderful music, and nasty villains. Some may just call this a "low grade Bond rip-off" but the filmmakers did a wonderful job with their shoestring budget to bring us a really enjoyable espionage thriller. I especially dug the gritty filmmaking nature to the picture very reminiscent of the popular Italian spaghetti westerns of the day.

Ken Clark is a likable handsome lead and is perfectly cast as a Bond Clone. He's a decent actor and holds his own in onscreen fights (the "From Russia with Love" inspired train fist fight was especially thrilling). He may work for the CIA as opposed to her majesty's secret service but I do believe Bond has met his match!

Are you a fan of early 1960s James Bond films? Then I highly recommend this 077 adventure. It may have a tight budget and the villain is rather lackluster but it doesn't hinder this espionage thriller too bad. I say give it shot if you can find it as it is hard to come by but it was released on DVD by Dorado Films.

The Dorado Films DVD I have to admit is disappointing as the picture ratio is 2.35:1 stretched to 1.85:1 making the image and characters look taller. I found it very annoying and it detrimented my enjoyment for the film. I contacted Dorado Films about the problem and they responded with a very courteous email that they were going to fix the ratio problem with the future release of the film. I love to support small cult DVD companies and their professionalism on the matter will ensure that I will buy future DVD releases from them.

Dick Malloy will return in "From the Orient With Fury"