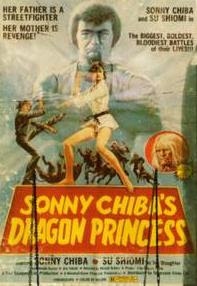 Etsuko Shihomi is quickly becoming one of my all time favorite martial artists... and she's a woman! I would have never have thought one of my favorite martial artists would be a woman just for the simple fact there aren't many of them in the film industry but I quickly fell for her after watching the "Sister Street Fighter" franchise. Man is she talented! With her winning me over with her "Sister Street Fighter" I quickly wanted to see every other film in her filmography and the first one I could seek out was "Dragon Princess", or "Sonny Chiba's Dragon Princess" as it is known in the American market despite the karate king only appearing in the first 15+ minutes.

The film opens with an atmospheric scene where our dragon princess as a child is taken into an old run down church by her father (Chiba) only to have him jumped by three sadistic assassins. They cripple him but leave him alive as long as he moves far away. He takes his daughter to America where he rigorously trains her for 18 years before he dies. Now all grown, she heads back to Japan to take down the head bastard and assassins that caused her father's untimely death.

Though the film has a shoe string budget, director Etsuko Shihomi is still able to craft some great atmospheric scenes very reminiscent of spaghetti western films at the time (since I am a spaghetti western nut then this is a major plus!). The windy church opening and the snowy rooftop training sequences are tops. The villains are also major badasses and all unique (the blind swordsman whose Achilles heel is ringing bells).

The problem with this martial arts flick is that the plot is insanely simple. I don't expect complex plots when it comes to martial arts films but this is the most cliché script imaginable thankfully saved by some clever directing and the presence of both Shinhomi and Chiba.

Another annoying element which is only seen in the American cut that I have on DVD is a sequences that comes out of nowhere in the middle of the film featuring a guy dancing with a drug induced topless women. It has no significance to the plot what-so-ever and it was hastily spliced in by American distributors to inject a little nudity into the picture. A complete insult to fans and the director.

With a better plot this could have just as entertaining as Shihomi's "Sister Street Fighter" series but as is it's a step below but still a must see for fans of these exploitation Japanese martial arts cheesefests.