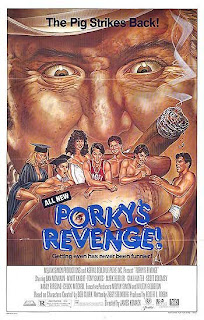 Eagle eyed viewers will notice one glaring individual missing from this third "Porky's" film. That person would of course be original writer/director Bob Clark. Why did he pass on doing "Porky's III"? Could he be he had moved on to bigger and better projects or was it due to the fact he failed with "Porky's II" and decided to say "hell" with the franchise. Whatever his reasons 20th Century Fox decided to milk the Porky teat one last time (can't make a money making franchise die!) and forged on without Clark's involvement. Were they able to craft a solid, interesting sequel improving on aspects brought about in the first two entries? Obviously from my rating that would be a big HELL NO.

Most of our cast returns from the previous films but I have to say it's amazing how four years can age a person. These are the oldest high school students this side of 36 year old Wendy O. Williams from "Reform School Girls." It really adds to the films unintentional hilarity. A comedy being unintentionally funny.... can that really happen? Well "Porky's Revenge" proved to me it could.

The films look is also drastically different from Bob Clark's restrained look of the first two pictures. He had the uncanny ability to make those films look like they took place in the 50s. Not here as though they try, it still looks like a 80s teen sex comedy as 80s soft lens shots, hairdos, and other odds n' ends rear their heads every now and then.

Knowing "Porky's II" failed with trying to add new aspects into the mix, the filmmakers here try to make "Porky's Revenge" more like the original and they do succeed but in the process make it come out like a third rate carbon copy making it really no better than the slew of "Porky's" rip-offs that filmed Cineplexes throughout the 80s. The cast looks too old and tired and the film lacks the onscreen presence of the character Porky, despite the title telling us he's out for revenge. It was due time to slaughter this pig and turn it into pork chops as this swine franchise has over lived it's welcome.