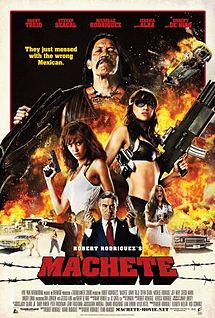 When the trailer was released for the then fictional film "Machete" on the Grindhouse feature, it was a cult film person's dream. Robert Rodriguez directing Danny Trejo as an ex-federale named Machete who is involved in a government conspiracy? It was almost too good to be true. Of course, then that dream came true and "Machete" became an actual film. Would it live up to the hype that this fake trailer created? Perhaps not to the extent one would hope, but "Machete" is a fantastic throw back to the grindhouse revenge thriller of cult film past and a hilarious watch.

Machete (Trejo), and that IS his name, finds himself as an illegal day worker in Texas after his wife and daughter are killed by a very powerful Mexican drug runner (Seagal). When he is approached by a politician (Fahey) to assassinate a Senator (De Niro) on his campaign trail, he falls into a trap. Now he has to clear his name and help his people rise up against a corrupt government before they find him and wipe him from this Earth. With the help of an ICE agent (Alba), a revolutionary leader (Rodriguez) and his priest brother (Marin) he has a long way to climb out of his own grave and bring justice to all.

If you go into "Machete" and hate watching 'bad' movies, then man you are going to HATE this one. Like many films that Rodriguez has been doing lately, sans his kids films, there is this definite and up-in-front love for the low-budget exploitation films from the 70s and 80s. This of course makes it insanely off the wall with its humor and embraces that extreme love of ultra-violence and chest thumping manliness. In all honesty, "Machete" might offend most viewers in one way or another unless you have leather back skin like our leading man Trejo. That's okay though. If you were offended in some way, then the film did its job.

Stylistically speaking, the over the top action, the stoic and gristled hero, the strong but very sexual female characters, and its oddly placed but very funny humor is a damn riot. My brother pointed out that after the opening sequence the fake scratches on the 'film' disappeared which was disappointing, but the style still remained. I personally loved the humor of the film and the dialogue was insanely quotable for characters that were fun and memorable. Some of the sub plots seemed a little like added padding (what the hell was the point of Lohan's part?) but overall the film moved like lightning and never let up.

If you are a fan of those over the top 70s and 80s throw back films, then "Machete" is a must see with its complete ridiculousness. Occasionally it can get a bit too serious with its political agenda concerning border patrols in Texas, but its down in such a way that it works with the style. A great and violent ride that really holds onto what we love here. Cult film making.

BONUS PRAISE: I (and I'm sure my brother agrees) will be seeing "Machete Kills" and "Machete Kills Again" if they actually come to fruition. A promised franchise for a film like this? Count me the fuck in.