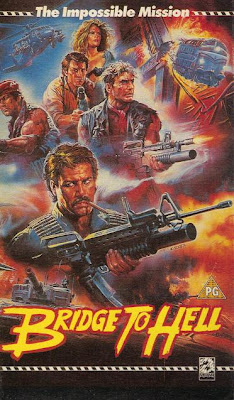 Umberto Lenzi will always be known for his horror, poliziotteschi and giallo films but he did make a few potential Macaroni Combat films in the 1970s with all star casts. When the 1980s rolled around he decided to give the genre a shot again by making "Wartime" and "Bridge to Hell" with both outings being astonishingly cheap and essentially plotless war "epics".

The plot is incredibly simple, so simple that Lenzi tends to let the film get off track following pointless action scenes and subplots that really have no relevance to the film. What we have here is 3 escaped Allied prisoners wandering across the Yugoslavian battlefront before running into a secret guerrilla Allied force where they learn about a 5 million dollar treasure held at a nun convent. They earn their weapons and a guide by stealing a plane and blowing up a train. While on their way to steal the treasure they get sidetracked constantly by having firefights with German forces.

Lenzi doesn't seem to know where to take the plot and just lets it meander going wherever it wants to. Along the way he lets glaring plot holes rear their ugly head. Many of the plot elements are even repeated. Our characters steal a plane, shoot some shit, and then crash it. Later on they steal another plane, shoot some shit and then crash the fucker again. This lame plot leads up to and incredibly unfulfilling ending but then again how do you tie up such a simple sloppy plot well?

The acting is incredibly bad and made me wish for all the colorful, likable actors that showed up in the classic Macaroni Combat films of the 60s, 70s and early 80s. These guys are just awful! To top it off the dubbing is subpar making the acting almost unbearable. The dialogue is appalling, but at least some of the lines get some unintentional laughter. My favorites include a nun saying "I thought Americans were like Russians. They only worship Satan." What the fuck was that comment! To make the conversation better the solder says "no we worship Martin Luther" and the nun retorts "He's worse than Stalin!" Holy shit that conversation had me rolling on the floor with laughter!

Like most Macaroni Combat films the special effects are extremely lacking but in fun entries of the genre like "The Inglorious Bastards" it just added to the charm and fun. Here it just adds insult to injury as the special effects of planes blowing up and such are pretty dire. An epic dummy fall from a bridge is perhaps the most headache inducing aspect of the lame effects.

I love Macaroni Combat films of the 60s, 70s and the early 80s but entries into the genre from the late 80s are just extremely cheap and damn near painful to watch. Is it all Lenzi's fault? It's hard to say as all his Italian contemporary directors by this time were also churning out shit so maybe he was just doing the best he could with his limited resources. Whatever the reason this film still sucks but to be honest it is better than most of the Macaroni Combat entries made in the late 80s. That my friend is a sad statement. Only for connoisseurs of trash cinema.