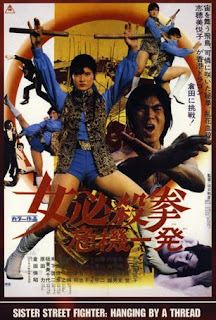 The "Street Fighter" spin-off "Sister Street Fighter" proved to be a great success so Toei Pictures decided to give the character her own franchise and quickly pumped out this sequel the same year. Now sequels that are usually pumped out this quickly are going to show flaws of their quick completion but surprisingly "Sister Street Fighter: Hanging by a Thread" is on par to the first film with quality and to be honest I actually enjoyed it more, a major rarity for me when concerning follow-ups.

Well now our street fighter is given the task to find her missing best friend and tracks her down to Hong Kong where she has been kidnapped in order to smuggle diamonds. Apparently this smuggling operation kidnaps girls in order to smuggle diamonds, get this, by implanting them in the cheeks of their butts. What?! That's the most outrageous idea ever! While trying to take the smuggling operation down, she meets her sister who happens to be working for the creeps. Now with the help of an undercover cop, she must save her sister and best friends life while simultaneously beating numerous foes.

It's not hard to see that the plot of this film is almost a carbon copy of the original. Instead of searching for her missing brother, she searches for her missing best friend. Instead of the smuggling operation moving heroin in wigs, they move diamonds in girls butts. Hey how else were they to outdo the wig motif? The next step would be smuggling in girls butts logically!

Director Kazuhiko Yamaguchi returns and again successfully gives the film a wonderful over-the-top comic book vibe but he out does the original film in one aspect.... he adds more violence and gore. Get ready for some eye gouging good time here! Seeing the beautiful Etsuko Shihomi flying through the air sticking sharp objects in villains eyes is priceless!

Yamguchi however this time opts to use more hand held camera shots and this got rather annoying during the climatic fight sequences with the camera shaking all around making it hard to focus on the action. This sequel, like the original, also makes the annoying mistake of freeze framing whenever a new fighter is introduced to give a title card reading what type of martial arts fighting style is being used. Talk about taking you out of the movie!

For a wham bam thank you mam sequel I enjoyed it immensely and really dug the heightened violence making this more of an enjoyable ride. People looking for new areas to take the character might want to skip it as the plot is just a carbon copy of the first film with some slight changes. Sadly this sequel never saw a theatrical release here in the United States but thanks to the invention of DVD and Blu-Ray, we can enjoy it in its original Japanese language with subtitles in various collections. Followed by "Sister Street Fighter: Return of the Sister Street Fighter".