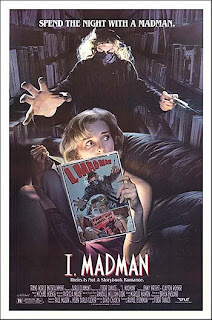 I remember seeing the trailer for "I, Madman" at the beginning of some film I rented as a kid and thought it looked alright, but nothing really worth hunting down. I became interested again when I saw the DVD on sale for a measly $3.98 on amazon.com so I decided to give it a shot since it was such a cheap price and for the fact it was directed by Tibor Takács, the guy who gave us the classic cheesefest "The Gate." I can honestly say now it was $4 well spent.

A super hot used bookstore clerk buys a book entitled "I, Madman" only to have the stories mutilated character start showing up in real life, killing off people close to her. Her detective boyfriend is going bonkers trying to believer her story but being horror fans we all know he will find out the hard way. Now it's a race against time to save her loved ones and destroy this psychotic fictional character once and for all.

For a low budget horror flick this isn't too bad, even if it really isn't anything more than a "Nightmare on Elm Street" rip-off. It's from the same screenwriter as "Nightmare 2" so you can expect fantasy mixing in with reality numerous times. Director Tibor Takács weaves these fantasy and reality sequences together cleverly and stylishly giving this low budget film a nice look. The mutilated killer is a lower rent Freddy Krueger clone but for such a film he works. Gruesome and threatening enough to make a good slasher villain.

My main beef with this film is our cast who really leave a lot to be desired. Jenny Wright (whom you might recognize from "Near Dark") is smokin' hot but sadly her acting ability, especially in emotionally driven sequences, is lacking. Her walking around her apartment in her panty clad ass does make me forgo some of her acting inadequacies. Our leading man Clayton Rohner is a complete weakling and doesn't pull off the tough detective one iota. I remember him playing an admiral in an episode of "Star Trek: The Next Generation." He couldn't pull off an admiral in that show and he can't pull off a detective here.

The ending also leaves a little to be desired but all-in-all this isn't a bad little horror film. Around this time director Tibor Takács, was offered to direct "Nightmare on Elm Street 4" but was unable to due to scheduling but he responded with this interesting little "Nightmare on Elm Street" rip-off that's worth a look for horror fanatics, especially for a measly $4.