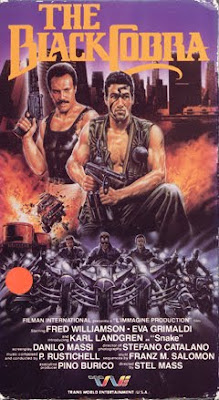 Wasn't Sylvester Stallone's "Cobra" bad enough? Did we really need a cheap Italian knock off of it? No we didn't but none-the-less the Italians thought it enough to rip it off and change the title just a bit to reflect its main star, cult icon Fred Williamson.

The plot is exactly like "Cobra". Sadistic gang going around brutally killing people for no apparent reason: check. Hot babe witnesses a murder and gets away without first seeing the face of the gang leader: check. Tough as nails cop assigned to protect her from the gang: check. Gang tries to murder the witness while she is in the hospital: check. Car chases: check. As you can see this is just "Cobra" with a lower budget and bad dubbing.

The main reason to see this film is for cult icon Fred Williamson but even he seems bored with the premises. He seems tired and wore out as the fight scenes are really poorly staged. He isn't even able to get his likable charm to shine through the silted dialogue as lines like "I'd do it even if it was Santa Clauses' daughter" come out more head ache inducing than unintentionally funny.

Director Stelvio Massi directed some decent Poliziotteschi films in the 70s but again like many of his director brethren his output in the 80s degrades to the Z-grade action level as this is a far cry from his superior 70s offerings. His directing just seems cheap and shoddy with poor zooms and pans. I understand he was working with nothing for a budget but he did nothing to try to heighten up the look of the film.

The worst part perhaps is the god damn score. We get one fucking piece, the same piece played over the opening credits, and it is the only piece of score played throughout the entire picture. That would be fine if it was a catchy, likeable score but it's not so it gets annoying really fast.

Like almost every other poliziotteschi film released in the 80s, "Black Cobra" weaves just above the line of god-awful and isn't even that fun for unintentional laughter. Williamonson looks bored and the directing is uninspired. For an Italian low-budget knock off this should have been a lot more fun than it was. Two sequels did follow ("The Black Cobra 2", "Black Cobra 3: Manila Connection") which are both MUCH better than this one. A fourth film entitled "Detective Malone" was also released but it was just a movie filmed around stock footage of Williamson from the first 3 films.

Bonus Rant: It was enough to rip-off "Cobra" but the writers decided also to lift some dialogue from "Dirty Harry". During the final gun battle, Willaimson's Malone character has the balls to say a slightly changed version of Dirty Harry's famous dialogue of how many bullets did he fire and if the thug feels lucky. Come on guys!

Note: The "Black Cobra" trilogy has fallen into public domain here in the United States and to be honest most of the releases are pure crap as they cram all three films onto a single layer DVD. The least crappy DVD release of these films is the triple feature from Diamond Entertainment which has all three films spread out on two discs, the second disc being dual layered so that means one film per layer! The transfer of the first "Black Cobra" though is still from a poor VHS source so only the most forgivable cult film fanatics, like me, are encouraged to hunt this DVD set down.