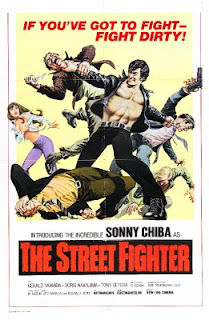 Chiba is our title character, a merciless dirty fighting karate master that hires out his skills to the highest bidder. When an important business man dies he leaves his daughter with billions of dollars, the Japanese Mafia and Yakuza attempt to hire our "street fighter" to kidnap her. When they refuse to pay Chiba's exorbitant price, they attempt to murder him in order to keep his mouth shut. BIG FUCKING MISTAKE! He instead offers his skills to protect the businessman's daughter and goes on a bloody rampage, literally!

Released in the early days of the martial arts film explosion, "The Street Fighter" pushed the envelope even farther of the violence seen in some early Bruce Lee and Shaw Brothers classics by piling on the violence and blood, so much that it earned the first ever X rating for violence alone. A martial arts movie rated X for violence?! Sign me up! Boy does it live up to its reputation of being violent as our street fighter is one ruthless mother fucker and one of the all time best anti-heroes ever to grace the screen. You want a fair fight? Then don't fight the street fighter! This guy will not hesitate to gouge your eyes out or to tear out your larynx. Fuck there is even one sequence where he rips a guys testicles off when he's attempting to rape a woman! Guaranteed you won't see a kill like that anywhere but here buddy.

What can I say about Sonny Chiba? This guy is just incredible! He's just a meaner, nastier version of Bruce Lee and to be honest I prefer that. He's just has a mesmerizing screen presence and an intensity that can't be matched. His martial arts abilities are just stunning and more violent than anything I have witnessed. This guy has solidified his spot on my of list of all time favorite martial artist.

Bonus Praise: This film marked the first ever "x-ray" shot of someone's body while being hit. When Chiba chops a guy's head, the film cuts to an x-ray image of the guy's skull cracking. Cheesy? Sure it is but it's also fucking great! This technique would later be copied in Jet Li's crappy American "martial arts" film "Romeo Must Die."