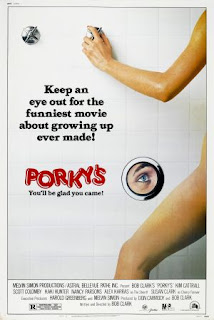 Taking place in the 1950's our film opens with a group of high school boys who have one thing on their mind... girls. They want to get laid so bad that they are willing to do almost anything to get the deed done, even driving to the next county and entering the popular strip joint "Porky's" and bribing the owner (keeper of the spare tire around the waste himself, Porky) to have sex with some of his dancers. He takes their money and pulls a fast one on them by dumping them in the river. Humiliated the boys slump home where hilarious shenanigans occur until they decide to all band together to get revenge on Porky by the end.

Surprisingly Bob Clark was able to capture the 50's setting wonderfully with his portrayal of social interactions, backdrops and sets (including vintage vehicles) and controversial subject matters at the time including racism. It's one thing to make a sex comedy, but to make a sex comedy in a period setting... that's impressive! Clark is also able to craft some truly outrageous moments that will guarantee even the most jaded viewers to laugh at least once. Where do we start... Kim Cattrall in the infamous "Lassie" sequence? The unforgettable voyeur shower scene with a painful, tugging ending? For my money the most hilarious scene of the film is the follow-up to the shower sequence where all the coaches having a discussion with the principle on how to "identify" the perpetrator who spied on girls in the shower. This scene is utterly brilliant and is a 4 minute take with tear inducing comical dialogue and 3 of our coaches giving us some of the most absolute realistic laughing ever!

The acting is also rather good for this type of film and they play off Bob Clark's surprisingly clever script well. A lot of the film is gratuitous with tons of nudity and I felt it cheapened the film a bit but Clark knew what would sell the film and the audiences ate it up. The film also tends to type cast all young males as heartless beings who only think with their little head. Despite that the film has plenty of brilliant comedy bits that are among the best and most memorable ever to be seen on film.

"Porky's" was a surprise box-office smash and filled up drive-in's night after night and in doing so gave birth to two sequels ("Porky's II: The Next Day" and "Porky's Revenge") and a whole slew of imitators, some good ("Revenge of the Nerds") and most bad ("Hunk"). Sadly due to the films raunchiness, it will always be popular but never truly respected for some its moments of comedy brilliance.