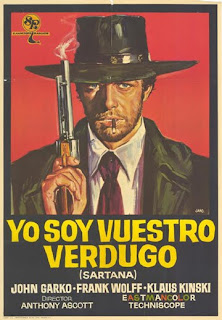 "The only queen I pull is the queen of spades" - Sartana

Though he created one of the genre's most enduring heroes in "If You Meet Sartana... Pray for Your Death", original director Gianfranco Parolini parted ways with the franchise to write and direct a similar film with a striking similar character in "Sabata." Why did he part ways from directing this sequel, the first of four to his glorious film? I'm not sure and none of my research has shown why but the series was picked up by director Giuliano Carnimeo who would go on to direct all four sequels. Was he good enough to fill Parolini's shoes? As you can tell from my rating he was more than enough and this first follow-up is a solid sequel in an extremely strong and enduring franchise.

The basic plot simple but like many Spaghetti Westerns they like to complicate it a bit by throwing twists and turns throughout till the very end. We open with a bank robbery where a man dressed as Sartana kills and steals $1000. The real Sartana gets word of these and has to get to the bottom of it before bounty hunters kill him for the price on his head.

Gianni Garko returns again as our smooth protagonist Sartana who is up to his old James Bond schemes again as he plays the "whodunit" game to get to the bottom of the robbery. Along with Garko he is surrounded by a strong cast of supporting actors including Klaus Kinski (returning from the original film but not playing the same character) and a compulsive gambler with a past connected to Sartana and Frank Wolff as a bum. Both of these quirky characters, despite their shaky writing connecting them to our protagonist, are an added element of fun that aids to the film.

Director Giuliano Carnimeo opts to go for a more crowd pleasing approach with this sequel by adding more action and humor making a bit more tongue in cheek in the process. To be honest I prefer the more serious brooding nature of the original but I still had a lot of fun with this new approach (ironically original director Gianfranco Parolini would even go further with the silliness with his film "Sabata"). One of these crowd pleasing elements includes having Sartana continually doing "magic tricks", like putting his gun under his hat while playing a pocker game and magically removing it to pull on somebody. Gimmicks like this would become a running gag in the series only further sequels would change it up a bit.

Though the original director didn't return "I Am Sartana... Your Angel of Death" (aka "Sartana: Angel of Death" and "Sartana the Gravedigger") still came out being an extremely entertaining sequel almost as good as the original (not enough to warrant a star deduction). It doesn't always hit the mark with its more tongue-in-cheek approach but fans of the genre will love it for its memorable sequences, badass protagonist and stylistic direction. In the hands of lesser filmmakers this could have turned out to be a dud thankfully Carnimeo makes it work marvelously.

Sartana will return in "Have a Good Funeral, My Friend... Sartana Will Pay"