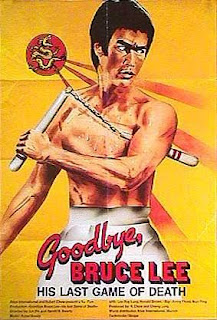 Do my eyes deceive me? Is this a properly remastered Bruceploitation film in it’s correct widescreen ratio? Holy shit it is! Sure there are multiple DVDs of this trashy martial arts film available but Anchor Bay Entertainment was nice enough to unleash “Goodbye Bruce Lee: His Final Game of Death” in an amazing edition (that is currently out-of-print) that sheds crystal clarity onto the eyes of us fans. Though it may not be one of Bruce Li’s finest films, I’m still happy as a pig in shit to finally see one of his films with such a great presentation.

The plot is a strange one as Bruce Li basically plays himself as a martial artist who is hired by film producers to finish Bruce Lee’s unfinished epic “Game of Death” due to the fact Li looks an acts just like him. The rest of the film is the movie that was being filmed with Li going after goons who trick him into delivering money for drugs they kidnap his girl so he has to fight his way up a six story tower defeating a different boss on each floor in order to save her.

The set up for this film is bizarre as the first 1/4 is Bruce Li being hired to replace the dead Bruce Lee for his final film and the last 3/4 is the movie with in the movie without acknowledging the first 1/4. Confused yet? This film is known to confuse some but one just has to role with it.

I do have to give this trashy martial arts film credit as it tried to stay true to Bruce Lee’s original vision of “Game of Death” unlike the real film “Game of Death” which was finished by filmmakers in 1979 completely changing Bruce Lee’s original concept around. Even so this is still a rather poorly made martial arts film (is any Bruceploitation film truly well made?) though it tries to stay true to the Lee legend while at the same time exploiting his fame. The ending fight scenes with Li ascending the tower doesn’t hold a candle to Lee’s originals that he filmed for “Game of Death” but they are still entertaining, just more in a cheesy aspect.

Bruce Li fits the Bruce Lee role perfectly (not only does he look like Lee but he is also a great fighter, it’s just a damn shame he never got better scripts) and why the hell didn’t they hire this guy to play Bruce Lee’s character when they actually finished “Game of Death” in 1979? I mean it’s a given he was born to do so!

Though not a good film I still encourage even Bruce Lee fans to see it just to see what Lee’s original vision for the plot of “Game of Death” really was. Hell to be honest this film might even be better than the actually “Game of Death” minus the amazing fight footage Bruce Lee filmed before his untimely death.

Did I forget to mention Anchor Bay’s DVD is amazing? It just brings a tear to my eye that they planned to release other Bruceploitation films with proper transfers if “Goodbye, Bruce Lee” sold well but of course it didn’t. It would have been nice to have DVD editions like this for Li’s better films like “Exit the Dragon, Enter the Tiger”, “Return of the Tiger” and "Fist of Fury II".