Beyond the Poseidon Adventure - 2/5 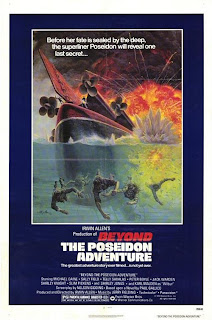 Some films should not have sequels. That's not saying I'm against sequels, in fact I feel the complete opposite. You might call me a 'sequel whore' as I love watching sequels of all sorts. However some films, such as "The Poseidon Adventure" , have a plot that could go nowhere with a follow-up. The people are rescued, wrap up, game over. There is nothing more you can do with it unless you approach the subject matter like the "Airport" franchise and have each film about a different group of characters and disaster event. Not here! Despite knowing how ridiculous the plot is producer Irwin Allen forges on adapting author Paul Gallico's absurd novel into one of the biggest sequel bombs of all time.

Taking place a mere hour after the events of "The Poseidon Adventure", we are introduced to a tug boat crew lead by Michael Caine who arrive at the overturned Poseidon to claim salvage on valuables. They meet a boat load of "doctors" at the same time (lead by Telly Savalas, so you know he's up to no good) and both crews enter the ship only to find another hand full of survivors. Now all hell breaks out as Savalas' crew is after plutonium on board and make it their goal to kill all witnesses.

This plot is absolutely ridiculous but how else could you make an interesting follow-up to a film that really had nowhere to go? Terrorists after plutonium? Really? I can imagine Gene Hackman flipping off the screen at that very plot device pissing himself with anger on how such a ridiculous concept is tarnishing the original film he did so well in. Also how hard up does your crew have to be to enter a capsized sinking ship (with random explosions going off no less!) to claim salvage. All that money is going to do you real good when you're dead fuckers!

Like the original Irwin again ensemble an amazing cast but don't let the all star cast fool you into thinking this is a going to be a good film. All these 70s disaster films had an all star casts but only a very few were actually good, and this lamentable sequel is definitely not one of them. Most of the cast phones in their performances to collect their paychecks and Sally Field has to give her most annoying performance to date spouting out awful diarrhea dialogue out of her cute little mouth ("I don't like being called a monkey!"). Her only purpose is to show off here great little behind in her water soaked pants. Michael Caine appearing in this film should be enough to wean audiences away. Nothing against the man as he is a terrific actor but he was cinematic poison in the late 70s and throughout the 80s. I swear he had more big budget box office bombs than any other actor just for the simple fact he took jobs based on how big the paycheck was, resulting in much of his output being the caliber of "Beyond the Poseidon Adventure."

In praise for the film it again has great production design and matches the original sets from the first film rather well considering they the original sets were dismantled seven years before. Sadly the special effects don't match the original as the few model effects are extremely lame (the ending explosion) or the filmmakers just opt to use shots from the original as stock footage. The worst effect has to be a lame sequence of Caine manning his tug boat at the beginning when it's obviously a make shift model in front of an awful blue screen with buckets of water thrown on to simulate a storm. Just pitiful.

I never thought I would see a machine gun firefight on the sinking Poseidon but here it is in all it's ridiculous glory! "Beyond the Poseidon Adventure" is the perfect sequel to go with the comment 'what were they thinking'. For that alone I recommend watching this sequel as it will make you hit your head one more than one occasion. Thankfully this would be the one only sequel as the Poseidon finally sank, just one film too damn late.