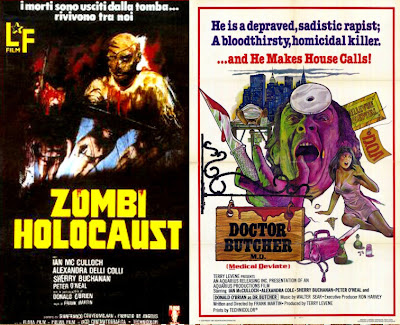 In the late 70's zombie and cannibal films ruled Italian Horror cinema. Lucio Fulci's "Zombi 2" and Ruggero Deodato's "Cannibal Holocaust" shocked and awed cult audiences and in turn were huge underground successes. Well director Marino Girolami got the notion that he could make a helluva profit by combining the genres so he made "Zombi Holocaust" (sometimes spelled "Zombie Holocaust"), the unholy amalgamation of "Zombi 2" and "Cannibal Holocaust". The result, though silly fun, only nips at the heels of the two films it unsuccessfully tries to combine.

Like "Zombi 2", the film opens in New York with a cannibal, that somehow got a job working in a hospital (?!), stealing and eating various body parts. He of course gets caught so a local nurse, that just happens to have an interest in anthropology of cannibal tribes (what?!). So a university anthropologist (Ian McCulloch, playing a very similar role he did in "Zombi 2") teams up with our nurse (why is she going along again?) and a couple of reporters to travel to a remote Caribbean island (sound familiar?) to track down the cannibal tribe and a mad doctor that is creating zombies.

This is a real clusterfuck of a film but that's part of what makes it so damn much fun. How did a cannibal infiltrate into a job at a big city hospital? Why is a nurse so into cannibal anthropology and why would she risk her life to travel to a remote island? Why is a mad scientist creating zombies on a cannibal island? It's all given ridiculous explanations but again that just adds to convivial nature of the film.

Italian horror fanatics will definitely get a case of déjà vu as this royally rip-off Fulci's wonderful "Zombi 2". Everything from the plot to the damn cast. Hell Girolami even films in the same location and sets! I shit you not! There is even a quick stock footage shot of a driving scene from "Zombi 2" and even a short stock scene like this shows how much visual style Girolami lacks compared genre greats like Lucio Fulci. Yes sadly Girolami lacks a keen visual eye as the film does have a flat, cheap look about it.

Gore fanatics will get an eye full (no pun intended) as this is a blood feast. How could it not be with combining both the zombie and cannibal subgenres? Open skull surgeries, graphic cannibal eating and even a zombie death with a boat motor to the head. Yea, gore fans will find plenty to sink their teeth into. We even get to see the luscious Alexandra Delli Colli nude, with island locals painting flowers all over drool worthy body in a scene similar in nature to the nude painting of Ursula Andress in "Mountain of the Cannibal God."

"Zombi Holocaust" awkwardly combines both the zombie and cannibal Italian subgenre's and isn't wholly successful at it, mostly due to stealing far too much from Fulci's "Zombi 2" and for the fact that director Girolami lacks a visual eye. For what it is though (a bottom feeder that is only made up of shocking scenes done better in previous, better horror films) this is a still a must see for gore fanatics. U.S. distributors however didn't know how to market the weird cannibal/zombie plot so the film was retitled "Doctor Butcher M.D." with poster artwork and trailers that falsely made it look like a slasher film with a mad doctor making house calls and butchering patients.

Written By Eric Reifschneider
Posted by Cronosmantas at 10:15 PM