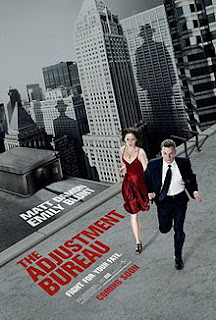 Despite the slew of watered down and action oriented science fiction films that flood the mainstream cinema world in the US (here's looking at you "Skyline"), there occasionally comes a film or two that reestablishes my belief that the genre is not dead and, in fact, thrives with intelligence and wit. "The Adjustment Bureau" rides the line between the two worlds, providing a thought provoking science fiction twist on a rather basic to digest foundational love story. It's a line that's very fine in the end and does still create some oddities, but the film basically rides it perfectly for what it is.

David (Damon) is on the cusp of greatness. He's young, established, hard-working, charming, and best of all, he's on track to becoming the next President of the United States if he stays on his political path. His knack for being spontaneous occasionally gets him in trouble, but when he meets the girl of his dreams (Blunt) one night after a crushing defeat - he wants his life to change. He would do anything to be with her. This is not part of the plan though and now David must face the ominous men in hats that are willing to change fate to keep David on track.

The ultimate fight the system sort of film. Defy the odds, bat down the forces holding you back for love. Sounds sappy, right? Luckily, it is in all the right ways. The basics here are a well treaded style for cinema. It's a love story. One of chemistry, love on first sight kind of love story. This heart of the film works in spades here and the chemistry between Damon and Blunt is fun to watch and works to really make this film stick (even if towards the end their romance gets stretched a bit thin with scripting) and the film's focus on making this the heart is where "The Adjustment Bureau" truly stands out.

Of course though, this isn't your usual romantic tale of woe (this review wouldn't be on Blood Brothers if it was) because it's based - very loosely might I add - on a short story by Philip K Dick. You know the guy that gave us mind fucks like "A Scanner Darkly" or "Blade Runner". Thusly, this film has a penchant for anti-authority thinking and over the top concepts like door warps through space that are only available through hats (I know, right?!). These are, for the most part, down played though. The religious under tones are easily digested and the odder concepts are played right through as if it's not important to really understand. This works the majority of the time, but occasionally the film's time leaps and unexplained character motivations make for some bumpy flow for the film. With the focus on the main romantic plot though, more or less these science fiction details are only there to create a visceral experience for the foundations - which works more or less. They do water down some of the more Philip K Dick craziness (reprogramming a person's tendencies towards a decision for instance - which is sort of just brushed over), but that's okay. Sometimes its hard to dig into that heavy stuff.

I would have appreciated a film more had to played up to its crazier sides like really pushing the envelope with the concepts presented, but as is, "The Adjustment Bureau" is a light hearted romantic tale that just happens to occasionally delve into odd science fiction tendencies. It's well written, well acted, and well directed. Think of "Dark City", but with way less creepy visions of a dystopian future and a lead character that never seems bat shit insane.