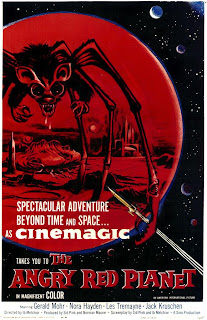 The red planet isn't only angry, it's fucking pissed off in this glorious 'so awful it's good' 1950's science fiction yarn. Let's just say "The Angry Red Planet" sure didn't leave this reviewer burning red with anger... but with a giant grin on his face as it will be sure to do the same with the small percentage of the audience this quickie was intended for.

Well in futuristic 1959, man makes their first mission to Mars which consist of a beautiful red head woman and three other guys who look too old or too fat to be anything near astronaut caliber. They land on Mars and waste no time killing their way through the flora and fauna of the planet, pissing off local wildlife and infuriating intelligent life form inhabitants.

What's so great about these cheezy sci fi films from the 50s is they are so damn politically incorrect. Our male crew members make passes at our female astronaut constantly, even commenting how her curves don't show through enough in some of her space outfits. When trouble comes calling our woman astronaut always runs to the men for help and if help isn't provided, she faint's in good womanly 1950s fashion. Hell even their mission is politically incorrect as they show up on the planet for a 'science expedition' and end up only killing and maiming local wildlife with freeze rays. So much for scientific research!

The absolute most delightful aspect that makes this film so near and dear to B-movie connoisseurs is the hilarious animals and life forms our astronauts run into. Of course there's the expected man-eating plants but the creatures that take the cake are a ship swallowing amoeba (with a rotating eye that spins in a 360 degree circle) and of course the rat/bat/spider monster that became the poster child for the advertising campaign. There's also Martians to boot that look like cut out standees placed in the space craft's view holes!

Director Ib Melchior tries to mask the amateurish special effects by garnishing the film with a red filter whenever our astronauts leave their shuttle. It's interesting at first but trust me your eyes will punish you later with a glorious headache (though it's not as bad of a headache one would get after watching "Tron" and it's pain educing colors).

"The Angry Red Planet" is a cornball science fiction film that is bad in all the right ways. We get banal, politically incorrect dialogue, silly special effects including cardboard cut-out landscapes and outrageous monsters that will quench the appetite of any 50s B-movie aficionado. Hell give me this 'Mars" film any day over the genre's newer, more realistic ventures like "Red Planet" and "Mission to Mars".

Written By Eric Reifschneider
Posted by Cronosmantas at 8:58 PM