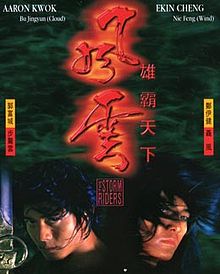 How does one go about even critiquing such an unusual film? "The Storm Riders" is like watching a live action anime that nods to the old school kung fu flicks of 60s all done with a focus on the fantasy elements. It's an odd film, particularly to my Americanized eyes, that seems to lack cohesion and logic throughout, yet remains awkwardly memorable and fascinating. It's based on a manga and seems to very much pull from the style so I'm guessing fans of that arena of Asian culture will find plenty to love here. I, on the other hand, found the film to be a bombardment of half thought ideas and relentlessly useless CGI. Not something I look for in my kung fu.

Cloud and Wind are orphaned young boys who are taken under the evil shadow of Conqueror, who plans to train them to be his warrior sons as he plots to take over as much as he can in a quest for global domination. After ten years of training in specific styles (suited for their names) the two close friends find themselves at odds when their love Charity is accidentally killed in a lover's fight by her father Conqueror. As they uncover a larger conspiracy to use them to his advantage, the two must put aside their disagreements to form the perfect storm of their powers or else die at the hands of their teacher.

I was certainly entertained by "The Storm Riders". I was expecting something a bit more serious from director Andrew Lau ("Infernal Affairs" and "Legend Of The Fist"), but the general ridiculousness of its plot and over the top melodramatic acting did play on my entertainment bone quite often. It was like watching "Kung Fu Hustle" when it wasn't intended to be funny. Throughout the entire film, people are shooting shit from their hands, flying around like Superman, and generally just doing random fantasy things like fighting a cave dwelling fire tiger/dragon. To this effect, the film is entertaining and its outrageous plot and characters (I do love how Cloud does practice martial arts under a waterfall) and I have to give it credit it.

That's about it though for "The Storm Riders". It's epic plot is hurried along at half way incomprehensible speeds, throwing in characters, places, and plot elements into the flurry of whirlwind story lines. It's focus is about has cohesive as scattershot can get and rhyme and reason have no place in this film. Characters pop up out of left field (enter medicine man and daughter) and random abilities (most of which are CGI) seemingly are used effortlessly int matches of wizard like magic.  Rarely does any sort of martial arts fighting appear as it focuses on their powers. A disappointing aspect if I do say so.

The story is tough to follow, filled with random plot holes and random characters that do random things. The acting and general look of the film is over the top, cartoonish, and ridiculous. It's incohesive and never follows logic. It's addicting to watch. I was glued. "The Storm Riders" is a horrid film to analyze, but a damn entertaining one to just soak in for what it is. Don't take it too seriously and it's a fun ride.

Written By Matt Reifschneider
Posted by DarkReif at 12:33 AM