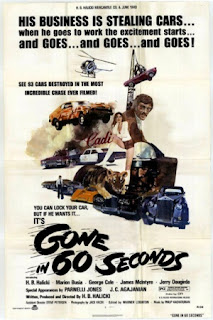 Thanks to an amazing chase sequence in the popular Steve McQueen vehicle "Bullitt", a spectacular chase sequence became a staple in crime and action films of the 70s. The "chase film" became a subgenre in itself, sometimes mixing with drama ("Vanishing Point") and even comedy ("Smokey and the Bandit"). Out of all the chase films that overflowed drive-ins, only one proudly proclaimed to have the longest chase sequence ever filmed.... at an impressive 40 minutes with over 93 cars wrecked! That film would of course be the original "Gone in 60 Seconds" (no, not the overblown Nicolas Cage remake).

With a film that has a 40 minute care chase it's easy to expect the rest of the plot is moot.... and it is. The 'plot', if you want to call it that, is quite terrible and overly simple. We get a car thief who has the impossible task two steal 42 rare and exotic cars with in an insane time span of like a week. That's it.

Director / producer / writer / actor H. B. Halicki knows his cars and stunts but the rest of the film is a complete mess. It's literally like the film was shot with no script, just a short outline and the rest was made up on the spot. The first half of the film is as slow as molasses and it jumps around with pointless scenes and banal dialogue, which thankfully is kept to a minimum since our entire cast can't act.

After suffering through the first half the audience is finally given it's praise worthy car chase... but even it can get tiresome after a while. There's only so many smashups and car flips I can take before it becomes tedious. Sadly it does become tedious thanks to novice filmmaker H. B. Haliki being unable to craft any real tension during the chase.

The stunts however are jaw dropping, including a massive jump at the end where our thief goes careening 128' and over 30' feet off the ground, not surprisingly injuring Halicki in the process. He was also injured when he collided with a light pole at a 100mph in which the film had to be put on hold until Halicki healed. That amazing footage was thankfully left in the film. No CGI here... unlike the remake!

Halicki's passion was cars and it shows as the only thing worthwhile is the car chase and even it can get old after awhile. The rest of the film is almost unwatchable thanks to Halicki having no real idea on how to make a cohesive movie. I'm sorry but I prefer a little more workmanship into my chase films... give me "Vanishing Point" any day over "Gone in 60 Seconds." It may not have a record long chase but at least it's competently made. Gearheads and Speed Channel enthusiasts may only apply.

"Gone in 60 Seconds" not surprisingly earned a cult following but sadly all DVD incarnations of the film are what I like to call "tinkered" with. That means people went back fucked with the film, completely changing the soundtrack, end credits and even the sound effects. Though I was not a fan of the film, I completely understand why fans were so angry. Don't fuck with films! We love them they way they are, flaws and all!

Written By Eric Reifschneider
Posted by Cronosmantas at 9:22 PM