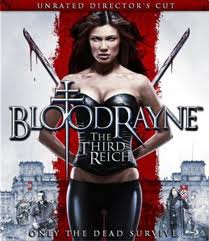 Haters rejoice! The "Bloodrayne" series has yet to die! Even after the atrocity that was the second film (which basically had nothing going for it - not even excessive gore or nudity for the hardcore horror fans), Uwe Boll continues to push this franchise into a third entry. Technically, I would say that this is better than two, but that's like saying cutting off your head at the jaw is better than cutting off your head at the neck. Really the end product still is a rather horrid experience.

Rayne (Malthe) has now survived until the Nazi reign in Germany. She continues to hunt through vampires and has included the Nazi group within that category I guess (bloodsuckers!). Unfortunately, when she helps out a resistance force against some Nazi militants she accidentally turns one of their leaders into a vampire. Now this evil Nazi commander has powers and a desire to spread these new powers, but he needs Rayne to give Hitler the ultimate immortality.

Haters rejoice! They fixed the major problem with "Deliverance" for this third entry. The acting? No, that's still pretty awful (particular nods go to Malthe for her over acting issues). The directing? It's slightly more cohesive, but he tends to drag out many sequences to death and many of the edits and choices of scene changes makes no sense. The plot? It's basic and towards the end the film tends to make less and less sense as it seems to wander through the story to make sure to get to certain moments with little bumps as possible. Nope, its none of these essential building blocks of a great film. These may have been slightly made better, but not enough to truly make it better.

The problem that's fixed with "The Third Reich" is that is get's back to just catering to its young male audience. Lots of gratuitous gore and nudity. Most of it senseless and out of left field. The fighting sequences are poorly executed but oh well. The blood spurts from the sword slashes go sky high! The romantic sub plot is non existent - but that's okay...there are two sex scenes with Malthe doing some things that definitely pushed this into very hard R territory (very hard R).

It's not enough to kick it above its previous entries though, as it still is very random and purposeless, and nothing else in this film is strengthened enough to make it hold up against any sort of criticism. At this point though, I'm not watching these films looking for a good movie. It's still not good, but it certainly doesn't disappoint. How can you when you have a series like this?

Written By Matt Reifschneider
Posted by DarkReif at 5:09 PM