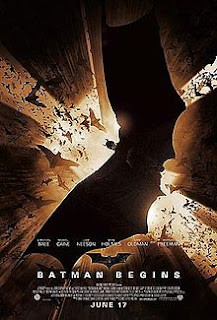 After the debacle that was "Batman & Robin", the Batman franchise went through a slew of new ideas and concepts (including a "Batman Beyond" film which would have been very cool if done right) to reinvigorate the series and give the fans something they could sink their teeth into. The eventual product was Christopher Nolan's "Batman Begins", a reboot of the series that takes the film towards a darker and more realistic tone that combines of a few of the comics and/or graphic novels. The final film is impressive to say the least even if the film is still flawed in some of its directions.

Bruce Wayne (Bale) has struggled with the death of his parents at the hand's of Gotham's rising crime rate by rebelling and generally being an ass. When he decides he is going to seek out to understand the criminal mind by immersing himself in it at a global scale, he finds the teachings of Ra's al Ghul and Ducard (Neeson) and their ninjitsu based training are just what he needs. After a disagreement about the extent to which justice is to be administered, Bruce returns to Gotham and creates an alter ego Batman to fight crime. When he discovers a greater conspiracy being headlined by Dr. Crane (Murphy) aka The Scarecrow, Batman will find just how far he is willing to go to protect and serve justice for the city he loves.

The trick to "Batman Begins" is to look at it as a 'real comic book film'. As in, the film focuses on giving logistics to the comic book style of Batman. This works with Nolan's darker and more symbolic style. From its general atmosphere, to the gadgets and weapons of Batman, to the character development, all of it is done in a more straight forward sense.

The most impressive aspect about this Batman is that its a return to a darker more psychological form for the character. Bruce Wayne is torn and its this struggle that makes Batman such a 'real' and touching character. Although much of the mysteriousness of the character might be lost in explaining his origins, they do make the audience connect with Batman (even if Bale's Batman voice is ridiculously deep). Partner this new realistic tone with the style of the film (Gotham looks kind of like Chicago here with its modern look) that brings everything into a real world look (the Batmobile is a military vehicle and Scarecrow is given a reason for his mask and fear toxin) and "Batman Begins" certainly pulls a 180 to revamp the franchise from where it left off.

Granted, it still isn't a perfect film despite how well it pulls off the concept. At its heart its still a comic book film and sometimes plot points don't quite fit right. Training with ninjas? The fear toxin being dispersed by a giant magical water vaporizer that instantly dries out water mains? Sometimes there is a battle to make it more realistic and the script doesn't want to cooperate. Partner that with a relatively weak romantic subplot that feels more or less tacked on and a script that tries to give Bruce Wayne food for thought by being way too preachy about fear, corruption, and justice and "Batman Begins" isn't quite the amazing film some claim it to be.

"Batman Begins" is a great reboot for the franchise though. It's return to a darker, more serious tone works wonders for bringing the 'dark knight' back into the shadows (even if the lost mysteriousness takes away from the enigma that is The Bat) and its clever use of some sub-standard villains makes for an entertaining watch. Truly a Batman for the new generation. It's not a perfect film, but I do enjoy the new direction the series moves with this entry.

Written By Matt Reifschneider
Posted by DarkReif at 4:04 PM