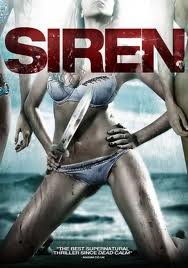 If a mythological siren calls out sailors to wreck their ships at sea, then "Siren" calls out horror fans to wreck their brains on semi-artistic nonsense. Although the cover makes it look like some cheap-ass straight to DVD slasher, the actual films desperately tries to create something more vivid and mind-screwy. In fact, its nothing really at all like a slasher, but more along the lines of a supernatural thriller. A film that goes for the out of the ordinary path, but ends up lost at sea with no direction to proceed.

A couple and their world traveling friend are going out on a loaned boat to get some well needed R&R and to catch up on old times. When they discover a man bleeding from the ears on an island not far from their sailing path, they try to help him only to have him die on their boat. As they return to the island to figure out who this man was, they encounter a young beautiful woman who seems to soothe their cares and arouse their desires. As time wears on though, the three find themselves uncovering a secret that has been at work for ages.

After watching the trailer, I was generally intrigued. A modern horror tale of sirens and people trying to survive? It looked slick and seemed inventive enough to get me to scoot over to the Red Box down the street and swipe my dollar to for the rental. Damn. I guess that's what trailers are for...making mediocre films look better then they are.

Not that "Siren" was all bad. In fact, the film gets a solid 'A' for effort and the cast and director get a solid hand for creating something that was relatively believable in execution. Unfortunately, none of this covers up the fact that "Siren" didn't make a lick of fucking sense. Particularly by the time it came to run to its conclusion. It starts off with some (odd) sexual preface about our couple that builds some solid character work and slows begins to delve into this mystery dead man and awkward woman. About half way through it just decides to jump ship. Odd violent dreams, multiple selves...it builds this 'I don't know what's real' style to it that could have been clever, but only accomplishes to confuse the audience to the point where they don't care. By the end I was so confused, I'm not even sure who died (if this was the purpose then they did it!), but I also wasn't sure if it mattered anymore.

"Siren" was a decent rental. It entertained. It's execution was much better than its foundation and it attempted to bring a smart modern take of a great mythos to life. It just doesn't make the cut though. It's directionless, over thought artistically, and just rather muddled. A fine way to spend a dollar, but not something that is going to wow the horror fans out there renting it.

Written By Matt Reifschneider
Posted by DarkReif at 4:12 PM