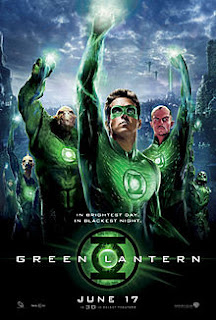 Martin Campbell. The director of the stellar "Casino Royale" and "Edge Of Darkness". Ryan Reynolds. The charismatic actor giving most comic book franchise a run including "Blade: Trinity" and "Wolverine". $300,000,000. A huge fucking budget. Mark Strong and Peter Sarsgaard in the supporting cast. With all of these things, "Green Lantern" should be a fucking epic film. Epic spelled out in all caps. The mythology and story for this legendary comic book hero could craft a film franchise for decades.

Then why is this summer blockbuster so damn mediocre?

Hal Jordan (Reynolds) is one of the best fighter pilots our military has seen in recent years. Too bad he's a bit of w wreck outside of flying. Can't keep a relationship. Can't even get to work on time. When an alien Green Lantern crashes on Earth, the ring of his power chooses Hal to be the first human to join the intergalactic Lantern Corps to replace him. Can Hal handle the responsibility of becoming one of the great space cops? When an ancient evil awakens and threatens Earth, only Hal is willing to stand up to the power of fear. Will it be enough though?

When I say that "Green Lantern" is mediocre, I really do mean it. It's just so disappointing. To be honest, I was never a fan of the comics all that much (space cops aren't my normal thing), but the potential for a great, fun movie franchise was all here and with the surprising solidity of the first DC cartoon of Green Lantern just a few years ago, I was sort of excited. Yet, with all of the talent up this film's sleeve it all comes off as a very watered down (and dare I say for a film with such a large mythos) and simple.

Through and through, "Green Lantern" half asses it. With $300,000,000 in the bank, all of the sets look cliche with nothing awe inspiring about it. The Lantern Corps home world  should inspire awe, yet it looks like a video game backdrop with little adherence to the relevance it should produce. Not only that, but the extensive use of CGI used in the film is worth a few eye rolls. Did you really have to CGI his damn suit? The film does have some fun moments of ridiculousness, particularly with his mind controlled Lantern powers, but even the villain looks like something just slightly better than what Little Nemo destroyed in Slumberland. (High five if you get this reference without looking it up).

Even the acting seems only partially there. Not that I expect a whole lot from Van Wilder, be even his normally fun banter and on screen charisma seems forced, leaving one sort of wondering just how this is going to work out about 15 minutes into the film. In addition, the supporting cast is never used to its full potential. Mark Strong is horridly underused (although knowing what becomes of his character does mean he gets a whole lot more screen time in future films - if they happen) and over and over again I found myself wondering where the charm went with this film.

"Green Lantern" is not the shit hole that many may claim it to be, as it is still a fun summer popcorn flick, but the potential for a great franchise kick off is certainly missed and missed widely. Not a lot of charisma is played out here and Martin Campbell and the writers make a huge mistake not embracing the huge epic nature of the film and taking it that extra step to wow the audience. This summer blockbuster just spirals down into an average film in the wake. One that doesn't touch the caliber that comic book movies have come to regularly employ.