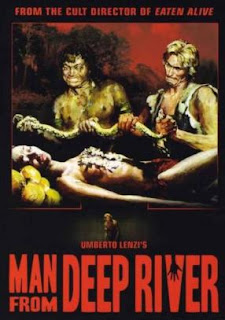 "Man from Deep River" (also known as "Deep River Savages", "Sacrifice!" and "The Man from the Deep River) has the notorious reputation for kickstarting the whole brutal Italian cannibal subgenre. To be honest that's how I actually heard of the film. However if you are a fan of this questionable subgenre you better change your expectations. Even though it's directed by Umberto Lenzi, the man responsible for two of the most notorious films in the genre with "Eaten Alive!" and "Cannibal Ferox", this is a far cry from the extreme nature of those films as this is more of a survival drama film with cannibalism only being an element in the picture instead of being the main focus.

The plot is actually almost identical to the popular American western "A Man Called Horse" only substituting the western background with a jungle and changing the Native Americans to jungle tribes. So the film starts with a photo journalist visiting Bangkok with his girlfriend, who leaves his ass and he somehow kills a guy while drunk in the bar. On the run from the authorities he decides to hire a local to take him deep river so in order to take picture but it only serves him to get captured by a reclusive tribe and in turn forced to be a slave. The daughter of the tribes leader, who just happens to be smokin' hot, takes a liking to him and after proving himself to the tribe and their customs, he 'marries' the bitch and then knocks her up.

The film is the life and times of living in a jungle tribe and if you've seen "A Man Called Horse" then you know exactly how the plot will unfold as it really is identical. Because of this I actually found the film do drag a bit. Even though it has the reputation of being a "cannibal film", it is actually more of a slow moving drama. Think of "Dances with Wolves" extreme Italian exploitation style.

The whole story arc of our main character is extremely clunky and haphazardly strung together. The beginning of the film is horribly cut, to a laughable extent, as within 5 minutes of arriving in Bangkok his girlfriend leaves him and he ends up killing a guy in a bar. It's truly a "what the fuck" string of events that leads him to the jungle and just left me shaking my head.

For an Italian exploitation film the acting is acceptable but it is no where it needs to be in order to realistically portray the love between the man from the city and the tribal beauty. Ivan Rassimov, whom I knew from numerous Spaghetti Westerns, and Me Me Lai, who shows off her glorious nude body on numerous occasions, just seem wooden together.

Enough of that 'plot' stuff, you're wondering about the CANNABLISM. Don't worry my friends, it's coming. Apparently the rival of our main tribe is a ferocious cannibal tribe that lives further up the mountain. We get to see this cannibal tribe in full on bloody glory when they attack a female tribe member and Umberto Lenzi spares no carrnage as he full on shows this graphic attack. The scene, though extremely gruesome, proved popular enough for Lenzi to re-use as stock footage in his next cannibal-fest "Eaten Alive!"

Of course with these type of films 'cannibalism' isn't' the only exploitative element. Lenzi also loads up the film with tribal nudity and sex scenes. There is also a few instances of real life animal killings, an element the genre would be known for and also the one element I despise in these films.

Overall "Man from Deep River" is a survival drama with a serious douse of Italian exploitation and because of this it will fail to truly enthrall audiences. It's too dramatic and drab for fans of Italian extreme cinema and it's too exploitative and brutal for fans of survival dramas. Needless to say, for better or worse, it was a hit in the underground circle for it's one, pinnacle cannibalism scene and the setting and that one scene would go on to inspire a slew of imitators, all more bloody and extreme than the next so the grindhouse theaters would be flowing with gore for years to come.

Written By Eric Reifschneider
Posted by Cronosmantas at 5:46 PM