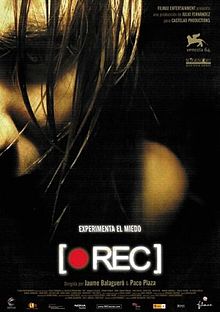 Although the handheld camera concept gets run a little thin anymore in the horror genre (just look at some of the mediocre films that have used it like "Zombie Diaries"), there are moments when it works well. The hard to type "[Rec]" for example. This is a film that uses its handheld camera style not as a gimmick, but as a craft to ably throw the audience into the fray and truly builds a horrifying experience with it. It never has that faux realism that so many of these films contain, but it actually feels like a real event. Something that many filmmakers need to take note of when utilizing the process.

Angela and her wonderfully understanding camera man Pablo are shooting an episode for a program that documents things that happen at night in Spain. Their latest gig is following around the night shift of a local fire station as they go about their nightly routine. The rather boring experience gets exciting when the fire station is called out to a small building to answer a distress call from the apartment residents. What they find in the building is not what they expect and soon the small group of people (camera crew and all) are quarantined within the walls of the small building with no answers and a quick spreading 'infection'.

The plot is simple. It's in the moment. It's nothing we haven't seen before. In fact, this 'infected' plot line of telling the zombie story is getting a bit old. Luckily, with abnormally efficient pacing, stellar acting performances, and an eye for the scary/suspenseful, "[Rec]" works it all in some amazingly profound ways. From its rather humble openings as Angela interviews the fire crew and how the station works we are given a taste that this is meant to fell as real as possible and with the directors use of long sequences, realistic editing moments, and jump scares that work the use of the handheld camera style they ably make it work. Our lead actress works that role for all its worth and the supporting cast each use their distinct character designs to really build up this realism and the story its telling. For once, the handheld camera style isn't forced but flows naturally as we spiral into chaos with the rest of these poor souls.

Something else that makes "[Rec]" such a phenomenal modern horror flick, is that is never feels the need to over explain. As the plot gets more complicated concerning the infection and its revealing properties, its done very subtly to the point that when major moments occur the audience slaps themselves for not seeing it earlier. The clues are buried in realistic banter and quips and it makes for a film that is worth watching repeatedly. Even the rather vague ending (which I am sure is further delved into with the upcoming two sequels and prequel) leaves an odd atmospheric touch of uncertainty with the viewer about the situation these people are in.

"[Rec]" is a blast of modern horror work that nails every moment for all its worth. The style works to its full effect thanks to a stellar script, acting, and directing. It's creepy, scary, and smart and its all rolled into one well presented package of foreign film brilliance. A must have for horror fans all around the world.