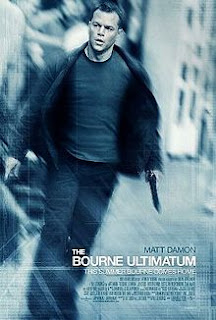 With the rather seething disappointment that "The Bourne Supremacy" left with me, it took me some time to work up the courage to wander into the third (and supposedly final one although its been announced that a fourth one will be released in 2012) installment. Could it really improve on the second with Greengrass as director? It does, for one, as Greengrass tones down his psychotic camera shakes for a majority of the non-action scenes and it continues to thrive on its realistic and often brutally quick paced plot. Although I still find plenty to love about "Ultimatum", I have yet to get accustomed to the aftertaste of the style of these films.

Continuing where "Supremacy" left off (and during as it would seem...we'll get to that), Bourne (Damon) is on the hunt for those connected with Treadstone that just won't leave him along and took the life of his love Marie. After narrowly escaping assassins in Russia, Bourne heads underground again to begin digging at his past eventually finding a journalist in London who is getting some very classified information from a CIA informant. Now Bourne must take on a ruthless branch of the CIA and get to some covert information about his past before they seal it forever. Will he die trying to find out how he lived?

To be perfectly frank with you, "Ultimatum" is pretty much the same as "Supremacy". Same style, same actors, same basic ideas all re-grounded into a slightly more cohesive and less shaky product. If you want, please go and refresh yourself on my review for the second film by clicking the link in the first line above. It's obvious that the same talent is invovled here because it is remarkably the same.

It's so the same, that they even decided to throw a few curve balls at you in odd ways. Like the fact that "Ultimatum" takes place during the same time period as its previous entry. It kicks off with a 'missing' scene with Bourne escaping Berlin and then about half way through the film we get to see the final scene from "Supremacy". The first time I watched it I pulled a double take and said "what the fuck?", but my second viewing made the snazzy twist of time line seem far more clever than I initially gave it credit for.

Once again, "Ultimatum" does rock in certain aspects. Damon gives a riveting portrayal as our rogue killer, the supporting cast is just as solid, and the story is cleverly twisted and brutal. All elements that make this an amazing piece of spy cinema. Even the action sequences are more solidified this time around and (despite the issues I have with the film) do seem more coherent. I could tell what was going on with the awesome motorcycle chase scene! A vital piece that notches this one over its predecessor.

Unfortunately, Greengrass is still the director. The cameras still do more shaking than Elvis' pelvis and its still irritating in the end. It's not quite as a bad, he seems okay with making it far more minute in the quieter more acting focused sequences even if the action sequences are more or less edited to death with his movie shaken syndrome.

"Ultimatum" is a good modern action film and benefits by improving on the major faults of the previous entry. It still suffers from the same faults, just not quite as badly. It still has an amazing cast to heave the film up there and an amazing plot and script to its benefit. Lucky though as Greengrass does his best to undermine all of that with his pseudo documentary style.

Written By Matt Reifschneider
Posted by DarkReif at 10:31 PM