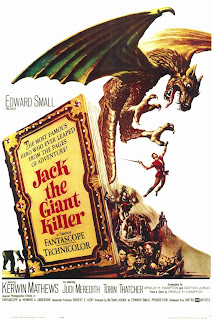 With the loveable fantasy adventure "The 7th Voyage of Sinbad" winning over audiences in 1958, producer Edward Small decided he wanted to tap that ass of success as he financed the ultimate rip-off . In order to have a proper rip-off he knew he had to have stop motion giants so the children's fantasy tale of "Jack the Giant Killer" proved to be the perfect candidate for a film adaption. In order to have stop motion giants he hired Ray Harryhausen protégé Howard A. Anderson to bring the monsters to life. One would think that would be enough to make a reasonable rip-off but no... Small didn't stop there. He even went as far as to hire Sinbad's main star, villain and fucking director. With all these ingredients was he able to copy the success of "Sinbad"? Sadly the answer is NO.

Well "Jack the Giant Killer" has the typical fairy tale plot of a peasant rescuing a princess (from a giant this time) only to have her get kidnapped by an evil wizard. Now our peasant Jack needs the help of a child, a viking, and a leprechaun in a battle (don't ask) in order to beat all of his evil giants, witches and flying beasts.

Even with the less-than-stellar effects we still get to see Jack battle two giants (one with two heads), a flying serpent, and even witches of the wind with some gnarly camera effects. There is even a battle between a kraken and a two headed giant but again the amateurish looking stop motion keeps this scene from having the impact it could have had in order to match the magnificent cyclops versus dragon battle from "The 7th Voyage of Sinbad."

Even our cast seem to know their only cashing in on the success of "The 7th Voyage of Sinbad" as both Kerwin Matthews and Torin Thatcher sleepwalk through their performances hoping their fame from "Sinbad" will be enough to carry the film.

Though a seriously flawed fantasy film, "Jack the Giant Killer" still has enough magic and wonder to bring out the child in me but it's still just a hair too childish for my taste. "The 7th Voyage of Sinbad" was able to entertain both children and adults on their level but one has to dumb themselves down just a hair for "Jack the Giant Killer." Perhaps with some better effects, more effort into the story-telling and production design could this have matched the film it was ripping off but audiences could see through its veil of disguise and "Jack the Giant Killer" ended up being a giant dude at the box office. I would call "Jack the Giant Killer" a valiant effort, but not a true success but still worth a look for fanatics of stop-motion effects from the glory age of cinema.

Note: Columbia Pictures, the company behind "Sinbad", even took legal actions against United Artists during the film's box office run for copyright infringement (yes that's how much "Jack" rips off "Sinbad"). Due to this legal action United Artists pulled the film and re-edited and re-released it as a damn musical! Thankfully that awful musical version has been lost over the years and the version presented on the DVD is the original, unaltered release.

Written By Eric Reifschneider
Posted by Cronosmantas at 10:17 PM