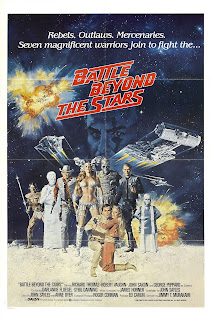 Roger Corman tested the waters for a low budget "Star Wars" rip-off by distributing the wonderfully lame Italian bandwagon effort "StarCrash". It proved to be extremely successful so Corman pushed on to produce and distribute a rip-off he could call all his own and "Battle Beyond the Stars" was born, proving Corman had what it took to create an extremely entertaining space opera on a shoestring budget and good enough special effects to provide stock footage for umpteen productions of his to come.

The plot steals from the legendary Japanese film "Seven Samurai", so much in fact this could be considered an unofficial remake with a space setting. Perhaps a better comparison would be an unofficial remake of "The Magnificent Seven" as Robert Vaughn plays the exact same character he got famous for in that popular westernized remake.

So we get is a Luke Skywalker wannabe named Shade (Richard Thomas) having his planet threatened by "Darth" Sador (John Saxon). Needing help Shade seeks of the help of seven warriors, including and not limited to an elderly Han Solo cowboy played by George Peppared, a Valkarie woman warrior, a reptilian lizard man and of course Robert Fucking Vaugn.

As you can tell the cast is fucking great, no doubt most of the films low budget going to pay the salaries of George Peppard and Robert Vaugn to give the film some bankable names. Though it's obvious these two took their roles for a nice paycheck, it's still nice to have 'em and it gives the film a hair more respectability. Richard Thomas, though not totally likeable, has enough charm to him to hold the film together as our young, virginal lead. Being a male it's obvious that cult icon Sybil Danning stole the show for me with her gigantic bosom almost bursting through her lack of wardrobe.

Behind the scenes we get a fantastic special effects crew giving us impressive visuals. The guys who provided the laughable effects for its brother in crime "StarCrash" should take notes after watching this. The score is also impressive, it being the early work of famous film composer James Horner, a man who would provide amazing scores for such famous films as "Star Trek II" and "Avatar". His score actually brings flashes of "Star Trek II" to my eyes when I hear it... yea it's that impressive.

John Sayles script is not surprisingly predicable, I mean how could it not be being a rip-off of "Star Wars" and derivative of "Seven Samurai". Where it makes up for its predictability is that the whole plot has it's tongue firmly placed in its cheek never taking itself too terribly seriously. That is what I believe gives the film so much of its staying power, being as popular with the cult film crowd today as it was back in 1980.

The plot is insanely predicable but the imaginative characters, likeable actors, surprisingly good special effects, epic score and script that doesn't take itself too seriously makes "Battle Beyond the Stars" the crème de la crème of "Star Wars" rip-offs. So grab a bag of popcorn, a giant soda and sit down for a fun-filled space opera that helps define the drive-in popcorn era of films.