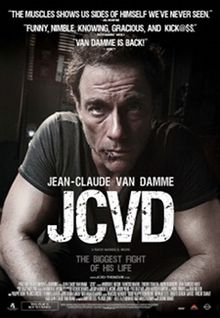 Well, what do you know? I've been a Jean-Claude Van Damme fan for a very long time and I have yet to see him truly 'act' and make it worth my while. He has done fine jobs before at getting it to work, but with "JCVD" you truly get to see a new side of Van Damme. One of dramatic irony and well placed humor. One that tells the world that 'hey! I am not just the action star you all know!"...oh yeah, and the movie's damn good too.

Jean-Claude Van Damme has hit some life troubles. His agent is wishy washy at getting him worthy roles, his child custody hearing went sour very quickly, and money is very tight. Just to pay his lawyer he is going to have to make a hefty withdrawal from a local bank in Brussels just to make it right. Unfortunately, he happens to walk into the bank as its being robbed. Now Van Damme is caught in a world where is on screen hero persona and real life tired man are going to clash and he hasn't slept for two days.

What a strange film. Jean-Claude plays himself in a fictional situation (that certainly pulls from real life in many aspects) where he has to face his own life in new and meaningful ways. Despite this rather awkward concept, the film rises above it all to give us an artistic and often comedic look at how the life of an 'action star' isn't all its cracked out to be. Van Damme shows us a side we have never seen before - one that can legitimately act. He delivers on all foundations for this film and really works the 'role' for what its worth, even giving a heart felt monologue that strikes all the necessary emotions. For this I was extraordinarily impressed.

To match Van Damme's enthusiasm for playing a fictional self, director Mabrouk El Mechri pulls all the strings to make this film work beyond a gimmick. Starting off with a self-referencing single shot action scene, Mechri establishes the documentary style with flair and vision really working some of the odd moments to their fullest and not shying away from dark humor that is brought to the forefront with its story (including some awesome self referencing moments about being an action star and Steven Seagal's ponytail). The film has a killer vibe to it with some great directing (although the color scene is a little drab for my tastes) and it rocks the plot to its fullest.

I highly recommend this film to any fans of Van Damme fans out there and even those looking for a great film to watch. "JCVD" works its gimmick to the heart and creates a film that rises above its own style and creates an emotional and tense thriller/comedy that is worth the time invested.

Written By Matt Reifschneider
Posted by DarkReif at 11:34 AM