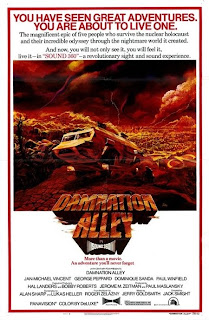 Giant super imposed scorpions, armored man-eating coach roaches, a monster armored vehicle and George "A Team" Peppard... sounds like perfect ingredients for a big budget 70s B post nuke movie to me. Thankfully, it is.

World War III breaks out (despite no one looking really concerned) and all the nuclear explosions knock the earth off its axis (I call bullshit!) so all the seasons and weather have gone bonkers. The radiation also has played hell with evolution, causing scorpions to grow to the size of compact cars and cockroaches to crave human flesh. We get a small group of surviving soldiers hiding out in a missile silo when they decided to build two huge, armored all terrain vehicles in order to travel across the country in order to reach survivors on the east coast. Of course it isn't easy.

Along the way our soldiers run into an array of weird shit that makes this large budget B effort loads of fun. Hillbilly cannibals, psychotic weather patterns...a nd of course my favorite is Salt Lake City being infested with flesh eating cockroaches. Nothing like killer bugs to get your blood pumping!

The cast for the most part is great for such an effort. George Peppard is one of the masters of cheese so it always brings a smile to my face to see him in a military leader role. Hell even the despicable Jan-Michael Vincent gives a likable performance as the cocky drone soldier, actually like he gave a shit about the film unlike his attitude in later pictures. "Nightmare on Elm Street" and "Watchmen" fans will also get to see a young Jackie Earle Haley as a foul mouth little boy that can throw a rock so accurately it could knock the wart off of witches nose.

The characters, however, are rather callused. First of all no one seems all that concerned that he world is at war in the beginning. They all really act indifferent to the situation. They also show no respect for any of their friends killed throughout the film. These guys aren't Mad Max or the Man With No Name so show some heart!

"Damnation Ally" is the type of film I would have watched a lot as a kid. The idea of soldier's loading up in a kickass armored vehicle and charging across a post nuke landscape would have captured my imagination and it still does to this day. Though a large budgeted, studio film it feels like a low budget B movie and that aspect makes me enjoy the movie even more. It doesn't come close to other post nuke films of the day like "A Boy and His Dog" and the "Mad Max" trilogy but for what it is I found it to be a ball of nuked fun.

Written By Eric Reifschneider
Posted by Cronosmantas at 8:16 PM